An Honorary Squirrel: The Acorn Woodpecker

The acorn woodpecker is a bird of the American southwest that has a very squirrel-like habit of storing acorns. In fact, this medium-sized woodpecker is so compulsive about stashing its nuts that it makes the eastern gray squirrel look like a slacker in comparison!

That's right. Each autumn, a family group of acorn woodpeckers may store as many as 50,000 acorns in a single tree, called a granary tree, with each acorn placed carefully in an individual hole drilled for that nut.


This compulsive nut-storing is even more amazing when you consider that the acorn isn't even this bird's primary food. Their main foods are insects, tree sap, and fruits, with the acorns put aside as a reserve food to help them get through the winter.

Acorn woodpeckers are found in mountainous pine-oak woodland areas in southwestern Texas, New Mexico, Arizona, and California in the United States, and in Mexico and Central America. They nest in cavities in tree trunks or limbs. With their black and white face, with the red cap and white eyes, these colorful woodpeckers have been described as clown-faced. 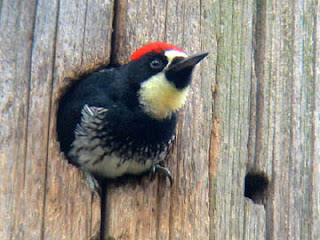 Acorn woodpeckers live in large and complex extended family groups that usually contain more than a dozen individuals. Families hold and defend territories. After young are raised, they may stay with the parents for several years to help their parents raise subsequent young.

The most important food is insects, which the birds glean from tree branches or catch from perches at the top of the tree canopy. However, a large amount of the acorn woodpecker family's time is devoted to creating and maintaining their huge acorn granaries. The granary may be in any tree, living or dead. In suburban areas, acorn woodpeckers may use a utility pole or even the wooden siding on a building, which can't make homeowners very happy!


The acorn woodpecker is unique in the level of cooperation that family groups devote to this communal food hoarding. The family will defend its granary against all acorn thieves, including woodpeckers and other birds such as jays, and, yes, squirrels.


If you would like to read more about the acorn woodpecker, this article from the Cornell Lab of Ornithology has more information about its family structure and food hoarding habits.

Email ThisBlogThis!Share to TwitterShare to FacebookShare to Pinterest
Labels: birds, nuts, other animals

Interspecies relationships are always cute. And even more so when one of the species is a squirrel! Two gibbons at the Henry Vilas zoo, Richie and Moe, recently adopted a baby squirrel from a nest that was in their enclosure. The video below shows one of the gibbons, Richie, as he holds, grooms, and plays with the squirrel.


As the article notes, the gibbons had tried to adopt a baby squirrel last year, but gave it back to its mother when the fascination wore off. This time, after the gibbons played with their friend for a couple of days, the zoo staff stepped in and, to ensure their safety, took the whole litter of squirrels to a wildlife rehabilitation facility for relocation.
Posted by Dan H at 5:56 PM 1 comment:

Email ThisBlogThis!Share to TwitterShare to FacebookShare to Pinterest
Labels: other animals, squirrels, video 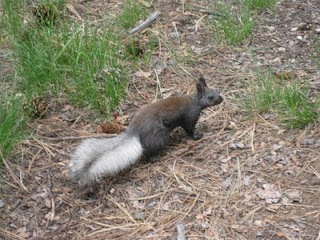 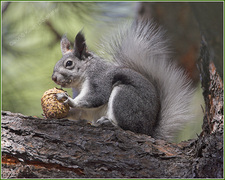 The Kaibab squirrel is just one of nine different subspecies of Albert's squirrel. The various subspecies have evolved sharply different appearances because of geographic isolation, after the last ice age left stands of ponderosa pine, which grows in cooler climates, separated at areas of high elevation.
Posted by Dan H at 8:40 PM 6 comments:

Last week we arrived at our new home in Lubbock, Texas. Taking a break from the work of moving in, a few days ago we visited one of the local landmarks, the Prairie Dog Town.


Lubbock's Prairie Dog Town is a large enclosure located in Mackenzie Park, that is the home to hundreds of black-tailed prairie dogs. It was established in the early 1930s by Kennedy N Clapp, a prominent Lubbock resident who was concerned that a government-run poisoning program would drive the black-tailed prairie dog to extinction. As explained on the sign pictured below, Clapp and a friend trapped two pairs of the prairie dogs as the original residents of the town. Mr. Clapp oversaw the operation of the refuge until he died. 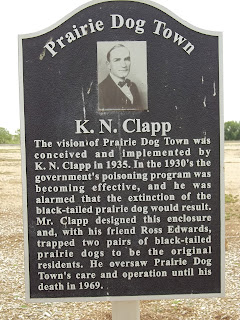 In addition to prairie dogs, numerous other animals either live in or frequent the Prairie Dog Town. This is just as true in the wild, where prairie dogs are a "keystone" species whose presence is vital to the plains and prairie ecosystem. The prairie dog's presence is important to many other species, such as the black-footed ferret, which feeds almost exclusively on prairie dogs, and the burrowing owl, which uses abandoned prairie dog burrows for shelter. Burrowing owls are common in the Lubbock area, seen anywhere that prairie dogs are found.

During our visit we saw this 13-lined ground squirrel going about its business.... 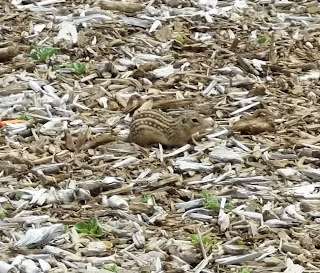 and this great-tailed grackle surveying the scene from the top of a shelter... 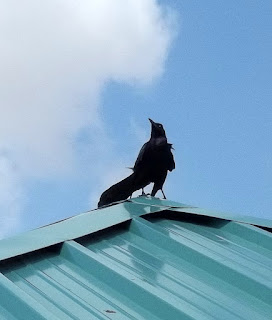 and, of course, many black-tailed prairie dogs! 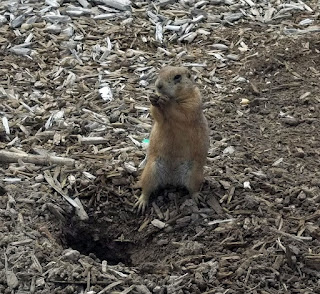 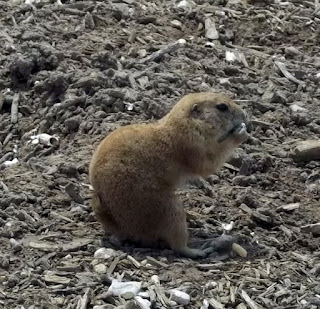 There is little doubt that the most beautiful and instantly recognizable physical characteristic of the squirrel is its tail. Tree squirrels especially are endowed with a long, thick, bushy tail, often equal in length to the rest of the squirrel's body, that even many squirrel haters can't help but grudgingly admire. The squirrel sitting on a branch in its "classic" pose--on its hind feet, a nut in its paws, tail in the "S"-curve over its back--may, for many city and suburb dwellers, be the most familiar image of wildlife. The squirrel's tail is such a stunning feature that back in 1899, one writer noted that "no one can see him put it into such graceful curves along with his delightful postures, without feeling that he is posing for esthetic effect."


The tail is, for the squirrel, much more than a nice decoration. In fact, it serves more functions than most people would likely ever imagine. In Squirrel Book, his book of squirrel essays and stories, Eugene Kinkead noted that the squirrel's tail


serves as a sunshade; as a blanket in cold or stormy weather; as an expressive aid to communication...; as a counterbalance in effecting marvelously quick turns; as an aerial rudder when its owner leaps from branch to branch, and as a parachute to soften the impact of occasional falls.

Protection from the elements is one of the more obvious uses of the squirrel's tail. The very name "squirrel" comes from two Greek words, skia, meaning "shadow," and oura, meaning "tail." For some ground squirrel species living in hot climates, such as the South African ground squirrel, this function is especially important. Using the tail as a parasol to provide shade from the sun can lower the temperature by as much as five degrees Fahrenheit, enabling the squirrels to search for food even in the midday heat.


The tail can also provide protection against cold weather and precipitation.

There is another important use for the heating of the tail: to help protect the squirrel against predators, especially snakes. Many species of squirrels, especially ground squirrels, live in areas where they are threatened by venomous snakes. One strategy that the squirrels have to protect themselves is tail flagging, which involves facing the snake directly, and waving the tail rapidly back and forth. At the  same time, the squirrel is increasing the blood flow to the tail, causing it to heat up. Snakes such as rattlers and cobras hunt more by detecting heat than by sight. Tail flagging together with the heating of the tail causes the squirrel to look larger and more threatening to the snake.


The tail also helps tree squirrels to maintain balance so that they can move about quickly and confidently among the branches high above the ground. It can even act as a counterbalance while the squirrel is resting or eating.


As important as the tail is to a squirrel, it's not surprising that squirrels put some time and effort into taking care of their tails. To anyone who pays attention while watching the wildlife in their neighborhood, a squirrel stopping to groom its tail should be a common sight. Some observers have even made the mistaken assumption that a squirrel was using its tail as a napkin to wipe its face, when in fact it was grooming the tail. 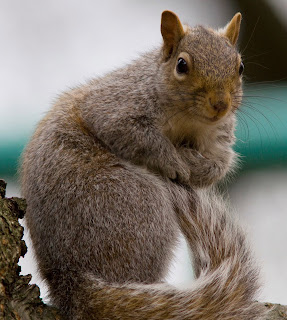 An international team of scientists has crowned the rat the biting champion of the rodent family. The researchers from the United Kingdom, France, and Japan recently developed computer models to simulate the skeletal and muscular structures of the jaws and skulls of various rodents, to determine which species are the most efficient at two kinds of bite: gnawing and chewing. 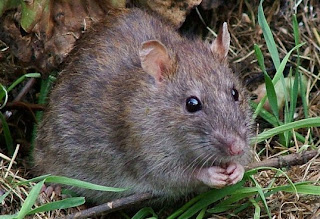 Most rodents are specialized to perform one or the other kind of bite with greater efficiency. Squirrels, for example, are more specialized for gnawing with their incisors, for a diet that is heavy in hard-shelled nuts and seeds. Other rodents, like guinea pigs, are better at chewing with the back teeth, since they eat more grasses.

Rats and mice, however, have evolved a skull structure that is adapted for both chewing and gnawing. And, to the surprise of the researchers, rats outperform both guinea pigs in chewing, and squirrels in gnawing. This gives the rats an extra level of adaptability that has allowed them to flourish in the wide range of environments worldwide in which we find them today.
Posted by Dan H at 8:41 AM No comments: