The arctic ground squirrel is a truly amazing animal. In some parts of its range these squirrels hibernate for seven months, and their body temperatures can reach as low as 27 degrees Fahrenheit, which is the lowest temperature recorded for any mammal. Now scientists believe that the arctic ground squirrel's winter sleeping habits may hold some clues to treating degenerative brain diseases such as Alzheimer's.


What interests researchers like Brian Barnes at the University of Alaska Fairbanks is how the ground squirrels' brains recover from the extremely long, cold period of hibernation. Because of the extended period at such low body temperature, arctic ground squirrels may lose millions of synapses during their slumber. These connections between cells are vital to brain functioning, and a similar loss in humans, such as can happen due to brain disease, is catastrophic and irreversible. But somehow the ground squirrels are able to rebound within two days of waking up, with no loss of cerebral function.


Dr. Barnes believes that if scientists can figure out how these squirrels are able to recover from what seems like serious brain damage, then maybe this knowledge can help in the search for treatments for brain disease in humans.
Posted by Dan H at 5:16 PM 321 comments:

Beebz Is On Top Of The World!

Actually, she was on top of a bookshelf in the living room this morning. 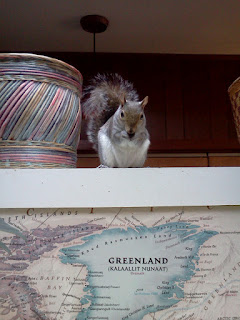 The back of the bookshelf has a world map design on it. Beebz jumped up there from my shoulder to enjoy a snack. 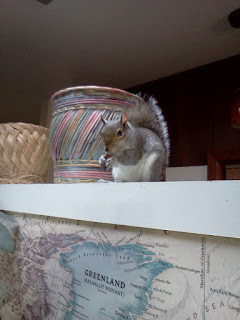 This Wednesday a strong typhoon hit Japan, causing widespread damage and at least one death. For thirty Japanese squirrels at Inokashira Park Zoo in Tokyo, however, the storm provided an unexpected opportunity for freedom. The high winds toppled a tree, tearing a hole in the netting that surrounds the squirrels' enclosure.

Zoo workers using traps and nets captured eighteen of the squirrels by the next morning. However, twelve still remain at large, despite efforts to catch them using traps baited with their favorite foods.

The Japanese squirrel, which is similar to the eastern gray squirrel of North America but with ear tufts, is native to the Japanese islands of Honshu, Shikoku, and Kyushu. Although it is not considered endangered, numbers have declined in recent decades due to the fragmentation of its forest habitat, and the species has disappeared entirely from the island of Kyushu. 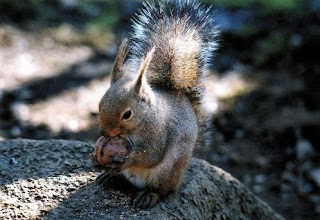 As workers continued their search for the remaining dozen AWOL squirrels, a zoo spokesperson issued a warning to the public stating that although squirrels "almost never attack humans," people should not try to chase or catch them. Whether or not they are recaptured, I hope that the squirrels are safe and comfortable, wherever they may be!
Posted by Dan H at 8:21 PM 6 comments:

Protecting the Grey Squirrels in the UK

I have come across a website dedicated to opposing the culling of grey squirrels in Great Britain. SOG (Save Our Greys) is looking for members who believe, like the founders Emily and Evie, that the persecution of grey squirrels is not the right approach to restoring the Eurasian red squirrel to its former numbers in the UK.

And I also want to mention again Professor Acorn's We're As Native As You, another very informative site dedicated to opposing the British grey squirrel cull.

Both of these sites argue, correctly, that the belief that the grey squirrel is the primary cause of the drop in red squirrel numbers in the UK is a myth. The decline of the red squirrel has been brought about by number of factors, most importantly urban development and habitat loss. Squirrel pox has exacerbated the decline, but the argument that this disease is spread by grey squirrels is shaky at best.

Those who think the mass killing of grey squirrels will bring back their beloved reds throughout Britain are sadly and tragically mistaken. As SOG suggests on their site, energy should be focused on development of a vaccine for squirrel pox. Conserving and restoring the habitat most ideal for the red squirrel--coniferous forests--where they remain, would also help to protect remaining red squirrel populations, especially in Scotland.
Posted by Dan H at 6:02 PM 6 comments:

Our friend Winkelhimer Smith the Painting Squirrel has recently raised an important and troubling question about the popular water-skiing squirrel Twiggy. Winkelhimer asked "What do you guys think about the people that make squirrels ride in boats or water ski?" and followed this question with speculation about whether the squirrels being forced to perform on the water skis are afraid of falling into the water and drowning.


I have wondered about this myself. In fact, for a long time I have thought about writing a post about Twiggy on this blog, but have hesitated to do so because I have very mixed feelings about this subject.

In general, I think it is wrong in most if not all cases to make animals perform tricks or stunts for public entertainment or amusement that they would not do of their own free will. I have demonstrated outside the Ringling Brothers' Circus protesting their treatment of elephants and other animals for this very reason.

Regarding the question of whether squirrels can swim, as Winkelhimer points out, the answer is that yes they can, but they prefer not to. According to the book Squirrels: The Animal Answer Guide by Thorington and Ferrell, gray squirrels will swim across streams and even large rivers if they have to during migrations in search of new food sources.

However, squirrels have never been observed riding water skis unless a human put them there.

The "About Us" page at Twiggy's web site explains how the original Twiggy (there have been several squirrels who have performed under this name over the years) was rescued after a hurricane and taught by Chuck and Lou Ann Best to water ski in the late 1970s.

I checked out a few videos from YouTube of Twiggy performing--most of the performances are done at boat shows, and take place in a wading pool with ankle-deep water. You can watch one of the videos below. My gut feeling from watching the performance is that the squirrel is getting onto the skis willingly, without being forced. I still have mixed feelings about this, but I don't see any reason to consider it abuse.

A New Jersey man was arrested and charged with animal cruelty for utterly senseless acts of sadism. Richard Baird of Linden, NJ was apparently so offended when squirrels got into his house that he spread peanut butter on the trunk of a tree in his back yard, and then killed the squirrels one by one with a BB gun when they came to eat the peanut butter. Then, as if that wasn't cruel enough, he hung the bodies of several of the victims on his back yard fence. When police responded to a neighbor's complaint of animal cruelty, they found six dead squirrels hanging on the fence, and several more victims' corpses on the ground nearby.


Of course, I'm sure that Mr. Baird is aware that if the squirrels were really bothering him or causing damage to his home, there are companies that will remove them humanely and seal any holes through which they were coming in. I'm sure he is also aware that the squirrels meant him no harm and were only seeking shelter as squirrels naturally do, and that taking violent, deadly vengeance on creatures that are totally oblivious of the reasons for your vengeance is not only pointless but sadistic and sick.

Mr. Baird faces a maximum of six months in jail and a fine of up to $1,000. This seems like a very small price to pay for the suffering and death that he has caused. I'm sure that many of those squirrels did not die instantly and must have suffered horrible pain and confusion after they were shot. I also have to wonder if any young children live in the neighborhood and if they witnessed this brutality.

I hope Mr. Baird gets the maximum sentence. It's the least that the criminal justice system can do to discourage murderous acts like this. 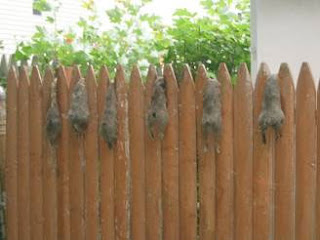 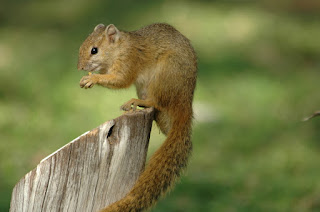 This is a small species of squirrel. Adults are only about 14 inches long, about half of which is the tail, and weigh about seven ounces. It is a light rusty brown or, in some regions, more gray in color, with a buff or sometimes white chest and belly.

Smith's bush squirrel is mostly arboreal, and diurnal, or active primarily during the daytime. The diet is mostly made up of seeds, but it sometimes will eat insects as well. 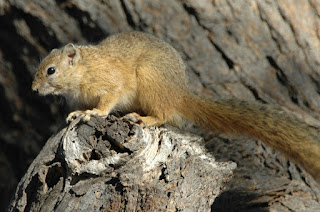 Unlike North American tree squirrels, the Smith's bush squirrels live in territorial family groups, with both adult males and females defending territory and nesting together along with their juvenile offspring. The nests are made in holes in trees. Group solidarity is reinforced through mutual grooming. 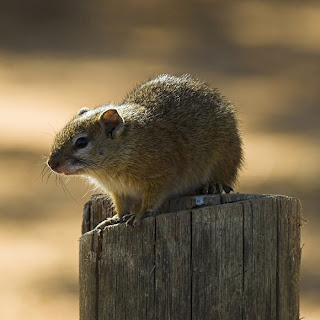 When threatened by an intruder or predator, the entire family group engages in a behavior called "mobbing." From the safety of a tree, all members of the colony make harsh clicking sounds while flicking their tails, gradually increasing the frequency and volume of the noise. This is probably done more to let the intruder or predator know that it has been seen and the squirrels are aware of its presence, so that hopefully it will move on to hunt in another place.
Posted by Dan H at 2:00 PM 8 comments:

Outrageous Miscarriage of Justice in Canada

I'm not sure what the Canucks have against squirrels. First it was Windsor, Ontario officials blaming the local squirrels for eating the bulbs out of their local tulip gardens. Now, a judge in Westmount, Quebec, has fined retiree and squirrel and wildlife lover Lawrence Klepper 200 dollars just for feeding squirrels and birds.


Apparently, showing kindness to squirrels and other wildlife is so offensive to the sensibilities of local officials in Quebec that in March, the city of Westmount actually had Mr. Klepper followed by a security officer. The undercover cop took pictures of Klepper distributing almonds and seeds to squirrels and birds, causing what officials described as a "public health concerns." The judge accepted the photographs as proof of the criminal behavior and found the defendant guilty.


Just what exactly those health concerns might be is not clear. What is clear is that Mr. Klepper has thirty days to pay the fine or appeal the ruling. The city is also seeking an injunction to prevent him from repeating his criminal behavior. Klepper's attorney, Eric Sutton, rightly describes the city's behavior in this case as "unjustifiable and unreasonable." That's putting it mildly. To go to such lengths to punish an individual for simply being a friend to squirrels and other wildlife is nothing short of bizarre.

I hope that Mr. Klepper chooses to appeal this ruling and, most of all, that he is able to win back his right to be a friend to wildlife.
Posted by Dan H at 11:52 PM 7 comments: