Squirrel Postage Stamps From Around the World

Squirrel Appreciation Day is January 21, less than a month away! To begin our observance of this important occasion, I would like to share some postage stamps from countries around the world that clearly appreciate their squirrels.

Starting in Asia, we have stamps from Japan, Korea (?), Laos, and Singapore. It's not at all surprising that the Japanese stamp depicts the ultra-cute momonga, or Japanese dwarf flying squirrel. I'm honestly not sure about the second stamp, but I am guessing South Korea. Maybe some reader will confirm or correct me on this. Singapore's entry shows the cream-colored giant squirrel, which, sadly, can no longer be seen in Singapore.

The next group is from Europe. Not surprisingly, most of them show Eurasian red squirrels, the most common variety on the continent. Finland, however, has on its stamp a flying squirrel.


From the United States, we have a stamp featuring our most common squirrel, the eastern gray.


And, finally, I am not sure which country this stamp, featuring a flying squirrel, is from. I'm guessing maybe Estonia, but again maybe someone will help me out here. 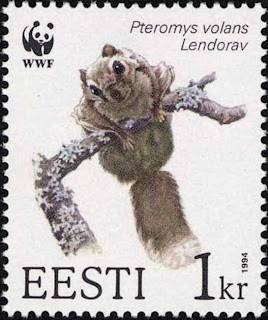 Of course, I have only scratched the surface. There are many more squirrel postage stamps, and maybe soon I will feature more. And hopefully one day the countries of the world will do more to help their wildlife, beyond honoring them on postage stamps.﻿
Posted by Dan H at 5:54 PM 5 comments:

The Nut Job, starring the voices of Will Arnett, Brendan Fraser, Liam Neeson, Katherine Heigl, Stephen Lang, Sarah Gadon, and Jeff Dunham, is due to be released on January 17. The animated film tells of the exploits of Surly, a city squirrel who along with his friends plans a heist of a nut store. Although I am not usually a big fan of animated films, the trailer below promises a hilarious, action-packed slapstick adventure. I'm looking forward to seeing it!

The Delmarva fox squirrel is an endangered subspecies of the fox squirrel that lives in parts of Maryland, Delaware, and Virginia. Its numbers have been greatly reduced over the past century by habitat loss due to agriculture, logging, and urban development. In recent years, conservation efforts have led to a rebound in the population of this rare squirrel, creating hope that it might be saved from extinction.

Unfortunately, a new report from the Center for Biological Diversity contains troubling news for the Delmarva fox squirrel. The report lists the squirrel among the five animal species most at risk from rising seas due to global climate change. 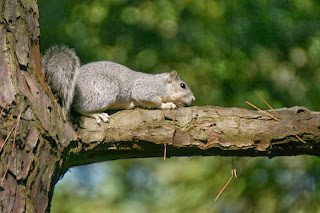 According to the report, if sea levels rise by six feet by the end of this century, half of the squirrel's habitat would be underwater. The Delmarva fox squirrel requires old growth pine and hardwood forest, which has already been greatly reduced over much of its historical range. If the sea level rises at the rate that many climate scientists predict, this will leave few places for this squirrel to find refuge. 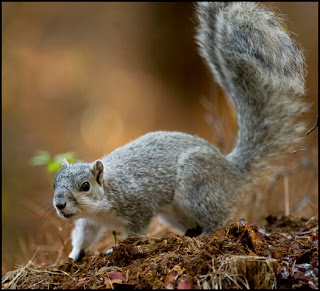 Even a more modest sea level rise would seriously reduce the already modest available habitat for the Delmarva fox squirrel. If governments, corporations, and citizens don't take steps immediately to reduce carbon emissions, this and many other species could soon live only in our memories.
Posted by Dan H at 6:16 PM No comments:

Despite the name, the cream-colored giant squirrel has several species which vary widely in appearance, some of them being quite dark in color. The coloring on the back ranges from dark-brown to gray, while the belly may be dark yellow or creamy white. The ears are short and round.

This squirrel is quite large. The body length is about 13-14 inches, and the strikingly long tail is 14-17 inches. Total body weight can be up to almost 3 1/2 pounds. In spite of its large size, the cream-colored giant squirrel moves about easily in the upper branches of trees, coming to the ground only occasionally to cross gaps in the forest canopy. 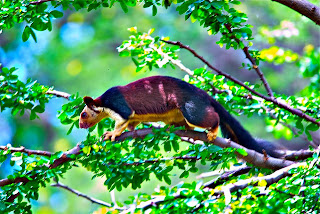 Like most tree squirrels, the cream-colored giant squirrel is diurnal, or active during the day. It usually forages for food during the early morning and evening hours, and rests during the middle part of the day. Favored foods include seeds, leaves, and bark, supplemented with nuts, fruits, insects, and bird's eggs.

Nests are often made in cavities in trees. During the breeding season, the female will construct a large drey, or nest, high in the trees. The drey is made of twigs and is globular in shape, similar to the familiar nests built by North American gray squirrels, but much larger, about the size of an eagle's nest. She gives birth to and cares for her young in this nest. 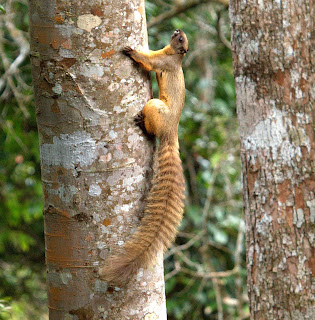 The cream-colored giant squirrel has an unusual eating habit. Most squirrels will sit upright with their tails arched over their backs while feeding. This species, by contrast, likes to balance itself on a tree branch, with its body extended outward on one side of the branch, and its tail draped off the other side as a counterweight. 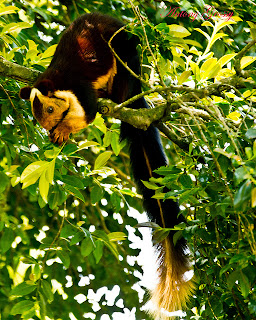 Although not considered endangered, the cream-colored giant squirrel is, as noted before, already extinct in parts of its former range. With deforestation and habitat loss continuing unchecked in much of southeast Asia, it is more important than ever that beautiful species like this, the resources that they need to survive, and the environments in which they live, are protected. 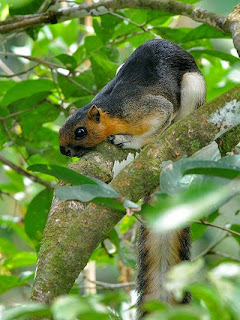 The African pygmy squirrel claims the distinction of being the world's smallest squirrel. This tiny tree squirrel, which is not much larger than a mouse, measures about 2.5-3 inches long with a tail about 2 inches long, and weighs around half an ounce. It is also one of the lesser-studied squirrels in the world. It inhabits forests of western central Africa, in the countries of Cameroon, Gabon, Equatorial Guinea, and northwestern Congo, although the range may actually be larger than this area. 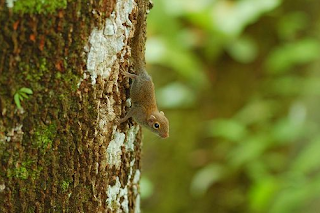 African pygmy squirrels live comfortably in a variety of different kinds of forest habitat within their range. Whatever the forest type, they are most often found in the lower levels from the floor to about 5 meters. When not active, they spend their time in nests made of leaves. The coloring is buff on the back, and olive-white on the belly.

Like most tree squirrels, African pygmy squirrels are diurnal, or active during the day. They live alone, but are not fiercely territorial. When they sense danger, they make a faint peeping noise to warn nearby squirrels of the threat.

Days are spent foraging for food on tree trunks. Individuals run up and down in trees, pulling off pieces of bark. They are omnivorous, feeding on bark fragments, fungus, oil droplets, termites, ants, and pieces of fruit. Unlike most tree squirrels, African pygmy squirrels do not store food in caches. 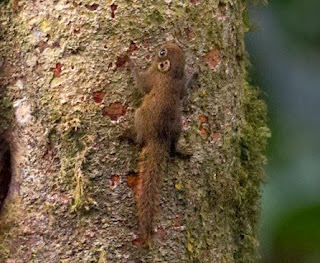 Very little is known about the mating habits of African pygmy squirrels. It is thought that usually one or two young are born, and as with most tree squirrels, the females provide all of the care and feeding for the young.

Unfortunately, the African pygmy squirrel is classified as vulnerable. Although not much is known about its total numbers or even its range, this tiny squirrel is threatened by habitat loss through deforestation. 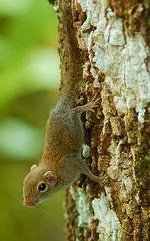