Newt Gingrich: Concerned that free handouts of nuts and acorns is creating a "culture of dependence" among the bushy-tailed rodents, Newt Gingrich has advocated putting young squirrels to work cleaning and making repairs on the houses, yards and patios of the wealthy. 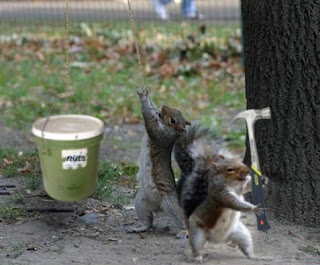 Mitt Romney: The former Massachusetts governor's campaign has been plagued by scandal after reports surfaced that Romney hired immigrant landscapers at minimum wage to trap all of the squirrels on his estate, and then drove them to the Canadian border strapped to the top of his car, where the squirrels were sold to pharmaceutical companies for drug testing. Romney has stated that the squirrels were not mistreated, that they were making an official visit to Canada to study the country's public health care system, and that they actually enjoyed the ride.

Rick Santorum: Has gone on record as opposing the legal recognition of "alternative squirrel lifestyles," stating that the rise of such perversion is responsible for the drastic decline in "traditional" mating for life between one male and one female squirrel.


Ron Paul: Enjoys catching squirrels with his bare hands and eating them raw.
Posted by Dan H at 5:58 AM