Squirrels of Texas: The Rock Squirrel

As we get ready for our move to Texas this summer, here is another of the squirrels that we might see in the Lone Star State.

The rock squirrel is a large ground squirrel, about 17-21 inches in length, with a moderately bushy tail, mottled brown upper parts and a buffy white underside. It lives in central and far-western Texas, and also in much of the southwestern United States including New Mexico, Colorado, Arizona, Utah, and Nevada.

As its name suggests, the rock squirrel is most at home in rocky environments: cliffs, canyon walls, piles of boulders, even rock fills along highways. They usually make their dens in burrows at the base of the rocks or cliff, although they will sometimes make nests in the hollows of nearby trees. Rock squirrels live in colonies. Females will often have two litters in a year, the first in April-June and the second in July-September, with each litter consisting of 2-5 babies. The young appear outside of the nest at about 6-8 weeks of age. 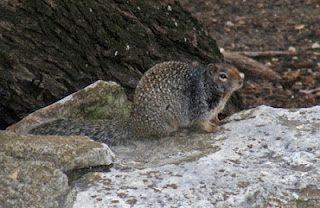 Although they are classified as ground squirrels, rock squirrels have amazing climbing ability. They are perfectly at home in the steepest, craggiest terrain. In canyon regions such as along the Pecos River in west Texas, they can be seen quickly and skillfully scaling what appear to be smooth, vertical canyon walls, using the tiniest of cracks and fissures for footholds.

They are also adept at climbing trees. They will climb juniper and mesquite trees to collect the fruits and seeds, and often will scale the 15-20 foot tall stalks of agave plants to feed on the flowers and buds. This squirrel has a varied diet that includes nuts such as acorns, walnuts and pine nuts, mesquite seeds, cactus, juniper berries, saltbush, wild gourd, sumac, various cultivated fruits and vegetables, and insects, especially grasshoppers and crickets. Rock squirrels will also eat carrion and even will catch and eat birds. 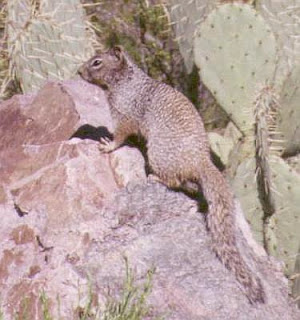