A Tale Of Two Towns

For squirrels, that is.

This is the story of two small towns. Although on opposite ends of this great country, these two rural communities have at least one thing in common: both have annual celebrations that involve squirrels. However, the celebrations are as different as night and day or, in this case, as different as life and death.

Longview, a town in southern Washington, on the Columbia River, loves its squirrels. Back in 1963, a local businessman, Amos Peters, watched a squirrel get run over by a car while crossing the street to visit the feeder that he and his coworkers had erected. Grief stricken, Mr. Peters designed and had built, at his own expense, a squirrel walkway, the Nutty Narrows Bridge, which to this day spans one of the busier streets in Longview. 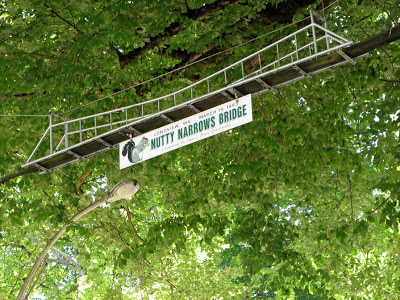 In 2011 a group of local leaders decided to honor the late Mr. Peters' legacy with an annual squirrel celebration, the Longview Squirrel Fest. The festival features a parade, local and out-of-town craft and food vendors, family activities and contests, musical entertainment, and fireworks. All of this just to honor squirrels, and to raise funds for the construction of additional squirrel bridges, one to be built each year, to keep the fuzzy friends safe.

Holley, NY, an upstate community near the city of Rochester, definitely does not love its squirrels. Each February Holley residents' thoughts turn to this: 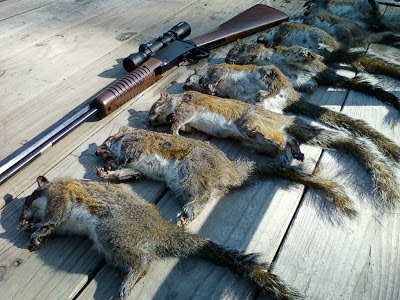 For no apparent reason, the town has, for the last six years, held an annual fund raising event sponsored by the local fire department, in which local residents--adults and children--compete to kill as many squirrels as possible. The seventh annual "Hazzard County Squirrel Slam" will offer cash prizes up to $200, in adult and youth categories, to those who kill the most and the largest squirrels on February 16. There is also a drawing to give away several guns, including an AR-15 assault rifle. Scores of squirrels will be killed, not for food, but simply for "entertainment." Many more will be injured, maimed, and left to die slowly and in pain.

It's hard to imagine what could be so different about these two towns, what could make one town seek to embrace, protect, and celebrate its squirrel population, while the other takes pleasure in causing pain, suffering, and death among its squirrels. On the surface they both seem like mainstream, working-class American towns the likes of which can be found throughout the United States. I suppose if we look deep enough we could uncover some demographic, economic, and social differences that would explain this vast gulf between the attitudes and outlooks of these communities.

I think I speak for a lot of Americans when I say that if I had to decide which of these communities to settle in, the decision to me would be clear: the town that embraces life or the one that embraces death;  compassion or suffering; comfort or pain; light or darkness.

Please help bring an end to the Hazzard County Squirrel Slam. There are currently three petitions that you can sign to make your voice heard against this event. You can sign them here, and here, and here. There is also a Facebook page where you can find more information on ways to protest this event and similar killing contests. You can also write to the Holley Fire Department, using the "contact us" link on the left side of the home page.
Posted by Dan H at 12:58 PM