The Importance of Prairie Dogs

A couple of days ago I wrote about the plan of the town of Frederick, Colorado to slaughter its population of black-tailed prairie dogs. I hope that you will take a moment to use the widget on the top right of this page to sign a petition asking town officials to reconsider their plans, which are already well underway.

I also hope that you will take a look at this page, by the Prairie Dog Coalition, which details some of the incredible benefits that the black-tailed prairie dog brings to the prairie and plains ecosystem. Prairie dogs are a vital component of a complex ecosystem, a "keystone" species which is important to the survival of ecosystem as a whole. Numerous other species are either dependent on or benefit from the presence of prairie dogs. The activities of prairie dogs aid in water conservation, soil aeration, provide shelter and sustenance for other species, control the spread of invasive and damaging plant species, and reverse much of the damage done to the environment by the grazing of cattle. Their burrowing actually increases the amount of vegetation that is most nutritous for cattle and other grazing species.

The south plains of northwestern Texas is one of the remaining strongholds of the black-tailed prairie dog, and is also the part of the world where I grew up, and will soon be moving back to. The population of black-tailed prairie dog has already been decimited--because of deliberate mass-extermination by humans, especially ranchers, the species was driven to the brink of extinction in the 1970s and has lost more than 95 percent of its population.

The prairie dog is not a rodent pest. It is a highly sociable, intelligent ground squirrel. Members of prairie dog colonies cooperate in almost all activities. They groom each other, help one another in caring for their young, watching for predators, and finding and storing food. They have a sophisticated communication system that includes signals and vocalizations with highly specific meanings, and are even capable of coining new "words" to apply to changing needs and circumstances.

The policies adopted by Frederick and other plains and prairie communities are based largely on misconceptions about prairie dogs: that they are "pests" or "vermin", that they compete with cattle for food resources (not true) and damage the foundations of homes (very rare, since prairie dogs are wary of humans and avoid living adjacent to houses). It would be extraordinarily sad if the prairie dog disappeared from the prairies and plains of North America. 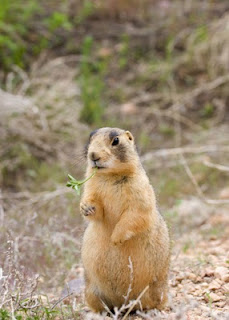