The red-tailed squirrel (not to be confused with the red squirrels of North America or Eurasia) is found in Costa Rica, Panama, Colombia, Ecuador, Venezuela, and Trinidad and Tobago. It is a tree squirrel with a rusty reddish tail, found mostly in dense forests at high altitudes. The body color of this squirrel varies by region, but typically is reddish on the belly and gray or olive-brown on the back. The red-tailed squirrel is a bit smaller than the eastern gray squirrel, with adults weighing a little less than a pound. 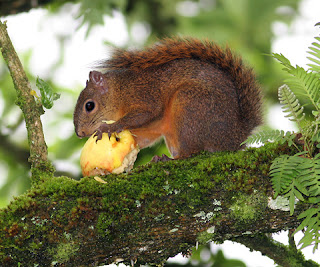 Like most tree squirrels, red-tailed squirrels nest alone except when the females are caring for young. Females are territorial, although the males are reported to be non-territorial. They eat nuts, fruit, and seeds, leaves, flowers, tree frog eggs, and insects, and, like the one pictured above, are especially fond of apples. These little squirrels are abundant in and around the town of San Gerardo de Dota, Costa Rica, which is the site of extensive apple, peach, and plum orchards. 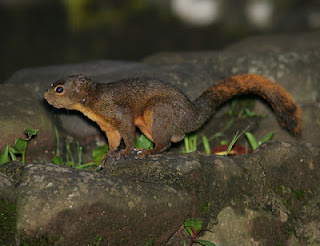