The thirteen-lined ground squirrel is probably the second most common native squirrel in the area of west Texas where we live. It is a small ground squirrel, measuring about ten inches in length including its three inch tail, and weighing only about six ounces on average. Its size and appearance is somewhat similar to a chipmunk, with tan or light brown sides, face, and belly. What sets this squirrel apart is the striking set of thirteen stripes, alternating light and dark, that run from the forehead down the back to the base of the tail. Five of the light-colored stripes are broken into a series of dots. 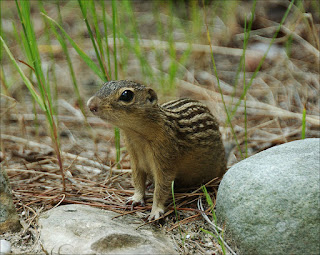 The range of the thirteen-lined ground squirrel includes most of the plains and prairie regions of southern Canada and the United States, extending as far south as west and central Texas. It is less social than many ground squirrels, adults living alone or in small colonies. Like most ground squirrels, it digs burrows for shelter. The burrow is complex, with several entrances and the main passage extending twenty feet or more in length. The entrances are inconspicuous, often covered with grass or other vegetation. This squirrel only ventures outside in full daylight, does not stray far from its burrow, and frequently stands up to survey its surroundings for danger. 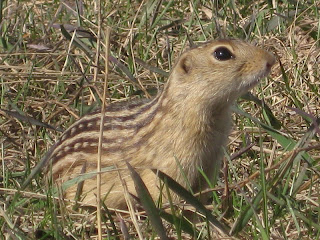 The diet of the thirteen-lined ground squirrel includes both plants and animals. Plant foods include seeds, grasses, herbs, flower heads, and grains. Meat makes up a substantial portion of the diet, including grasshoppers, beetles, caterpillars, worms, mice, and even small birds. These squirrels are known to viciously attack and devour cicadas when available. Dried seeds are stored in the burrows to carry them through the period in early spring when they awake from hibernation.

Mating takes place about two weeks after the end of hibernation, and results in anywhere from two to thirteen offspring. The young are blind and hairless at birth and weigh only 3-4 grams (1/10 of an ounce). They are weaned about six weeks after birth and after that are fully independent from their mother.
Posted by Dan H at 11:34 AM 7 comments:

The town of Olney, Illinois has for decades been noted for its large population of white squirrels. There are competing stories of the origin of the squirrels, but the community has adopted them as a source of pride and a local tourist attraction. The city has set up squirrel crossing signs and has even  passed laws to protect the rodents by prohibiting cat owners from allowing their pets to roam free, and forbidding anyone from taking a white squirrel out of the city. 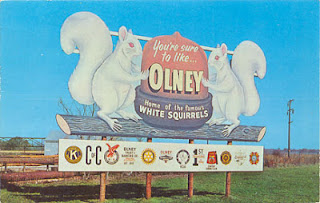 Unfortunately, over the years the white squirrel population has dropped steadily from a high of over 800 in 1941. And it seems that this decline may now be accelerating. Every year a local college conducts a white squirrel count, and this year's count, in October, found only 80 white squirrels in the town, a drop of about 25 percent from the previous year. While it is not clear that any single cause is entirely to blame, a city official has suggested that the extreme hot and dry weather of the past year could be a major factor.

Residents of the city are being encouraged to put out food and water for the squirrels, plant fruit and nut trees, put up squirrel houses, and to avoid cutting down existing trees during the season when baby squirrels are in their nests. Residents are also asked to obey squirrel crossing zones and laws prohibiting free-roaming cats and dogs.


Olney is one of a few places in North America that has a population of white squirrels. The News For Squirrels hopes that the residents of the town will do whatever it takes to protect this treasure.

(Just a note: both of the articles linked in this post mistakenly identify these squirrels as albino. These white squirrels are not true albinos, as you can see from the dark eyes in the photo above)
Posted by Dan H at 12:28 PM 8 comments: