Most people go to national parks like the Grand Canyon to appreciate the majestic scenery and the wildlife that these beautiful places offer. For two cowardly, pathetic men, allegedly from France, the canyon was apparently the perfect place to act out their sadistic impulses on a helpless squirrel.

In a video that went viral on YouTube a few days ago, the two men are near the rim of the Grand Canyon dressed, for some reason in only hats and underwear. While one of the men appears to film, the other first places bits of bread on the ground to lure a squirrel to the canyon's edge. When the squirrel approaches the rim, the man puts on a shoe, then walks up to the squirrel and calmly kicks it, sending it flying over the edge of the cliff. With an average canyon depth of around a mile, there is little chance that the tiny creature could have survived the fall unless it was lucky enough to land on an outcropping close to the top.

The person who posted the video has reportedly stated that he does not know the two men but that he thinks they were French, and that he did not know what was going to happen. Nevertheless, he did not report the incident to park authorities, and he was more than happy to post the video, complete with backing music. Honestly, I have doubts that the men really were French, or that they were really unknown to the videographer.

I have decided not to show the video on this blog, or even include stills from it. These two pathetic cowards have no doubt been enjoying the publicity as the images have spread throughout the internet. I will show a photo of a rock squirrel, the species that was probably the victim. Rock squirrels are common along the south rim of the Grand Canyon, and have become tame enough there that they often approach tourists for food handouts that are readily given. The poor squirrel in the video had absolutely no reason to think it should fear the two men. 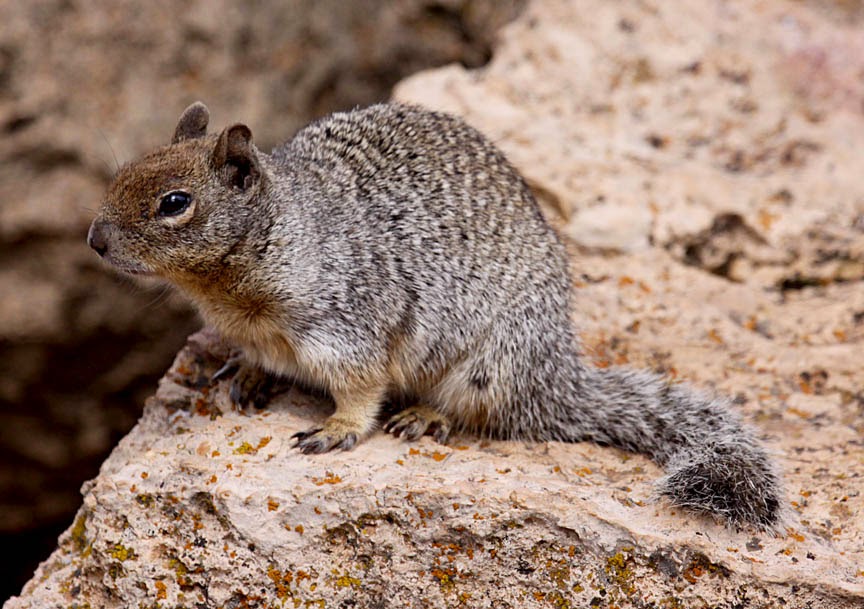 Thankfully YouTube removed the original video due to its upsetting content. The national park service has begun an investigation into the incident in hopes of identifying the men, but so far there seems to be little progress. Also, a petition is circulating on Change.org calling for the identification and prosecution of the men. And just today, a reward of $15,000 has been offered by PETA for anyone who identifies the sadistic killers.

It's always tempting in cases like this to call for the proverbial eye-for-an-eye, to say that the men in the video should themselves be kicked of the edge of the canyon. It is unfortunate that the maximum sentence that they might receive is six months in jail and a fine of $5,000. I hope that these loathsome jerks can be identified and given whatever penalty is available, and more importantly that they can feel the contempt of the whole world for their cruel, sadistic excuse for "fun".
Posted by Dan H at 1:08 PM 26 comments: