A threatened species, the grizzled giant squirrel or Ratufa macroura is native to highland riparian forests of Sri Lanka and the Kerala and Tamil Nadu states of southern India. There are three distinct subspecies. All three of the subspecies are found in Sri Lanka, while only one is found in India.

This is the smallest member of the family of giant squirrels that are found in south Asia, with a body length of 10-18 inches, and a tail that measures approximately the same, for a total length of 20-35 inches. Depending on the region and subspecies, this squirrel may be gray, brown, red or black. The underside is always lighter in color than the back. An agile climber like other giant squirrels, the grizzled giant squirrel uses its extremely long tail to maintain balance while moving through trees. 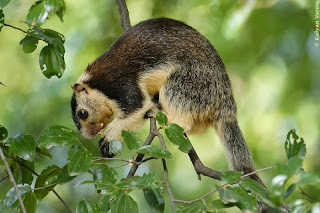 The ears of this squirrel are small and round, and sometimes tufted. It usually gives birth to one or two young, that are cared for for several months in a large drey placed high in a tree. Females may give birth twice in a year. The grizzled giant squirrel is very territorial, greeting intruders with loud vocalizations. If frightened, it is capable of leaping up to 18 feet between trees. 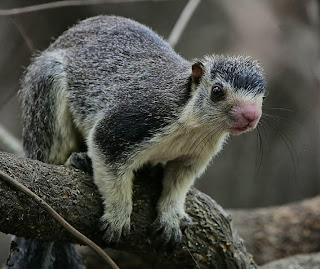 This squirrel species is threatened or endangered over its entire range. The population in Sri Lanka is much higher and more stable than the population in India, where it is in decline with probably fewer than 1000 individuals. The most serious threats to the grizzled giant squirrel include habitat loss to farming and logging, competition from non-native species, and hunting for food.

In 1988 a preserve dedicated to the protection of this species, Grizzled Squirrel Wildlife Sanctuary, was established in the Indian state of Tamil Nadu. The preserve, also known as Srivilliputhur Wildlife Sanctuary, covers an area of 485 square kilometers. In addition to the grizzled giant squirrel, the sanctuary provides a home for macaques, barking and spotted deer, elephants, flying squirrels, leopards, palm civets, lorrises, tree shrews, sloth bears, and numerous other species. An initiative is currently being undertaken among local communities to introduce eco-tourism to this refuge. Let's hope that this is undertaken in a manner that benefits the local communities, and promotes the well-being of these beautiful squirrels and the other species of this area. 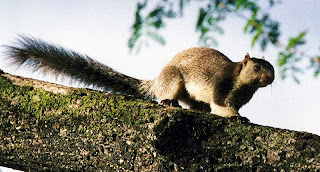