The Indian giant squirrel, also called the Malabar giant squirrel, has its name for a very good reason: this is the largest tree squirrel species on earth. It's head and body is about sixteen inches long (compared to around ten inches for an eastern gray squirrel), it's tail can be up to two feet long, and it weighs around 4.4 pounds. This is also one of the world's most beautiful squirrels, having a two or three tone color scheme with shades of black, brown, and beige. Squirrels of this species in different areas of India have different color schemes. 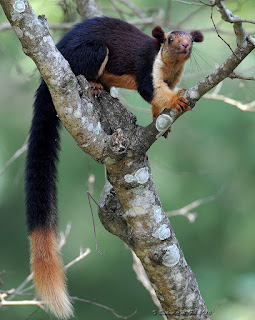 The Indian giant squirrel is very shy and secretive. Despite its size, it is more often heard than seen in the evergreen and mixed deciduous forests of central and southern India where it lives. It generally stays high in the forest canopy, rarely leaving the trees. Using its long tail for stability, this squirrel can leap from tree to tree, covering distances up to twenty feet. When it feels threatened by a predator, such as a leopard or a bird of prey, it will often freeze or press itself against a tree trunk to remain inconspicuous. It may also quietly descend the tree trunk and disappear into the underbrush to get away. 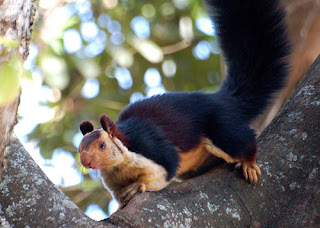 The habits of the Indian giant squirrel are quite similar to those of other tree squirrels such as the eastern gray. They usually live alone or in pairs, and are diurnal (active during the day) and herbivorous. They build large globe-shaped dreys of sticks as high as possible in the trees. A single squirrel will often have two or three nests, with one being reserved specifically for giving birth and nursing the young.

As you can see in the photo above, the tail is probably the most startling and beautiful feature of this squirrel. Longer than it's entire body, the large tail acts as a balance and rudder, allowing the Indian giant squirrel to move about quickly, running and jumping on surprisingly thin branches very high in the forest canopy, where it feels most at home. 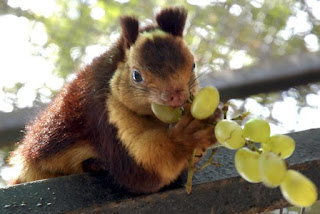