I want to call attention to a new novel that features squirrels. Are We Nuts? by Gisela Hausmann  envisions a future world, devastaed by the effects of climate change, in which floods and famine ravage the land, humans have disappeared and squirrels have become the dominant species. 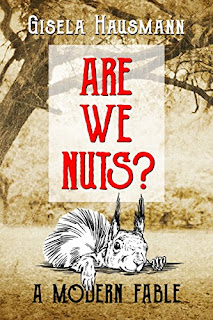 In the years after the great floods, the squirrels of the eastern seaboard of North America band together to survive their hardships, and form the Sciurus States. Learning to use the technology that the vanished humans left behind, it seems they have formed the ideal enlightened, cooperative society and left the troubled times behind. Or have they? As young Harry and his great-grandfather learn, the Sciurus States' leaders may be hiding dark secrets.

I will be posting a review of this novel in the next few days. I can tell you now that this is a fun read that is as relevant as it is entertaining.

The needless cruelty being inflicted on grey* squirrels in Great Britain is a topic that has become very important to me. One might think that as an American living in Texas, how the British treat their squirrels should hardly matter to me. But having spent time raising and caring for a rescued eastern grey squirrel, knowing firsthand how intelligent, expressive and affectionate these animals are, I can't help but care about any cruelty or mistreatment that affects them, wherever it might occur.


A number of groups exist in Great Britain that promote the extermination of grey squirrels in the UK under the cynical guise of "conservation." These include British Red Squirrel, the UK Squirrel Accord, Red Squirrels United, and others, including several regional groups. The primary activity of these groups is recruiting volunteers to slaughter grey squirrels, either by shooting or by trapping the squirrels, forcing them into burlap sacks, and then bludgeoning them to death (referred to as "humane" culling). The slaughter is referred to euphemistically as "grey squirrel control" or "grey squirrel management" but what it really boils down to is a pointless wholesale mass killing of intelligent, sentient animals who have done nothing to deserve their fate.

To justify this slaughter, red squirrel groups rely on a package of lies, myths and misconceptions about grey squirrels. At the root of the anti-grey argument is the mistaken assumption that the red squirrel is "native" to the UK while the grey squirrel is an introduced or "invasive" species. This false dichotomy, native vs. introduced, ignores the fact that species have been moving from place to place as long as life has existed on earth, and assumes incorrectly that red squirrels have "always" been present in the British Isles.

The truth is, the current populations of both red and grey squirrels in the UK are of fairly recent origin. Grey squirrels were introduced to England in the 1870s, released by wealthy landowners onto their estates as a novelty ornamental species, and since then have spread to most areas of the British Isles.

The Eurasian red squirrel was driven to extinction in the UK in the 18th century by a combination of habitat loss and hunting. The species was then reintroduced from the European continent. DNA research confirms that the current population of red squirrels in Great Britain is descended almost entirely from squirrels introduced from Scandinavia within the last two centuries. It is safe to say that the red squirrel has no more claim to "nativeness" than the grey squirrel in the UK.

Anti-grey squirrel groups in the UK rely on a number of myths and lies to justify their campaign of extermination. Two of the most widely-cited of these myths appear in a recent article by Bob Cartwright, an official with the regional group Westmorland Red Squirrels, that argues for the slaughter of grey squirrels in Great Britain's national parks.

First, Cartwright argues that grey squirrels are guilty of causing "economic and environmental damage to our woodlands," by stripping bark from trees, causing the trees to die. This argument has been used for centuries by the commercial timber industry, and in past times justified the mass killing of red squirrels just as it is used today against grey. The truth is, very few trees die as a result of bark stripping, and whatever damage does occur is outweighed by the benefits that squirrels--red or grey--bring to forests.

The new trees planted by squirrels through seed dispersal far outnumber those that are damaged by bark stripping. This creates a net benefit not only for squirrels but also birds and other animals and plants. Furthermore, bark stripping, while it may cause cosmetic damage to trees that is of concern only to timber harvesters, provides food and habitat that is beneficial to fungi, insects, birds, and numerous other forest species.

In recent times, squirrel pox is responsible for a very small fraction, around two percent, of unnatural deaths of red squirrels in the UK. Far more significant causes of death are motor vehicles (53%) and domestic pets (14%). And these numbers don't take into account the effects of habitat loss through urban and agricultural development. It's clear that humans have a far greater responsibility for red squirrel declines in the UK than the grey squirrel.

Anti-grey squirrel groups like to present themselves as conservationists, working to protect a beloved native species against the predations of an outside invader. They like to use terms like "control" and "management" of grey squirrels to gloss over the brutality and cruelty of what they are doing. They claim their methods are humane, but how humane is a squirrel caught in a trap, confused and terrified, for hours or possibly days, then being forced into a burlap sack to be bludgeoned to death by a poorly-trained volunteer? How humane is a nest of baby squirrels left to die of exposure because their mother has been killed?

I linked to several of the anti-grey squirrel groups above in this post. Most of these groups have social media sites on Twitter, Facebook, and others. If you care about what they are doing to grey squirrels in the UK, please let them know what you think of their actions.

*When writing about Eastern gray squirrels in Great Britain, I will use the British spelling grey.
Posted by Dan H at 9:23 AM 61 comments:

This blog has been inactive for a good two and a half years. I stopped posting not long after my rescued gray squirrel, Beebz, passed away unexpectedly, and I guess I just ran out of ideas of things to write about, but I have been thinking lately about how to refocus and restart. Once upon a time this site was a fun hobby and outlet for thoughts and opinions, and I think it could be so again.

My plan is to focus on three general topics:

I have recently received an advance copy of an upcoming novel about squirrels which I will post a review of shortly. I am looking forward to reviewing other squirrel literature as well.

I hope this will all be fun and informative both for myself and anyone who happens to stumble across this blog.