A few weeks ago I shared the plan of Berkeley, California to exterminate the California ground squirrels living in Cesar Chavez Park due to concerns that the squirrels' burrowing might release buried toxic chemicals into the adjacent San Francisco Bay.

Happily, this plan has now been postponed while the city looks for other options. The city council voted to order the city manager to report back in two months with a new plan for dealing with the squirrels, and a response to questions that were raised by citizens and activist groups, including the local Golden Gate Audubon Society, who were upset with the impending slaughter.

While it's possible that the squirrels could still face extermination down the road, it looks like the city of Berkeley is now wanting to find another course of action toward reducing the park's ground squirrel population. The Audubon group, in a comment letter submitted to the council, has made suggestions that include modifying the vegetation in the park to reduce the squirrel population, encouraging the presence of natural predators, the use of squirrel contraceptives, and stricter enforcement of rules against feeding the squirrels.

Perhaps in the future cities might want to reconsider the wisdom of building parks on top of toxic landfills. 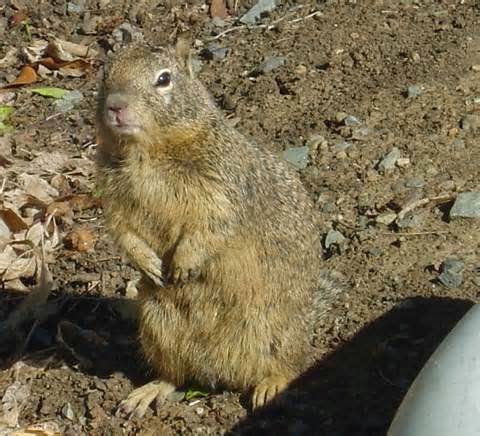 Just as the eastern gray is the most familiar squirrel in much of North America, the Eurasian red squirrel is the most common squirrel species throughout most of Europe and northern Asia. Its range extends literally from the Atlantic to the Pacific, including Spain, France and Italy in southern Europe to Scandanavia, to Siberia, parts of China, Japan and Korea. Geographically, it is almost certainly the most widespread of any squirrel species in the world.

Throughout this range, the Eurasian red squirrel can be found in both coniferous and temperate broadleaf forests and woodlands. The prefered habitat is coniferous or mixed forest, where mature trees provide nesting sites and a sufficient diet of seeds and acorns. Other foods favored by the red squirrel include fungus, tree bark, sap wood, and occasionally, if other food is in short supply, birds' eggs or even nestlings. Food is stored for the winter by burying or hiding in nooks or cavities in trees. However, the Eurasian red squirrel is not as proficient as the eastern gray at caching and retrieving the supplies, and much of the stored food goes unfound. 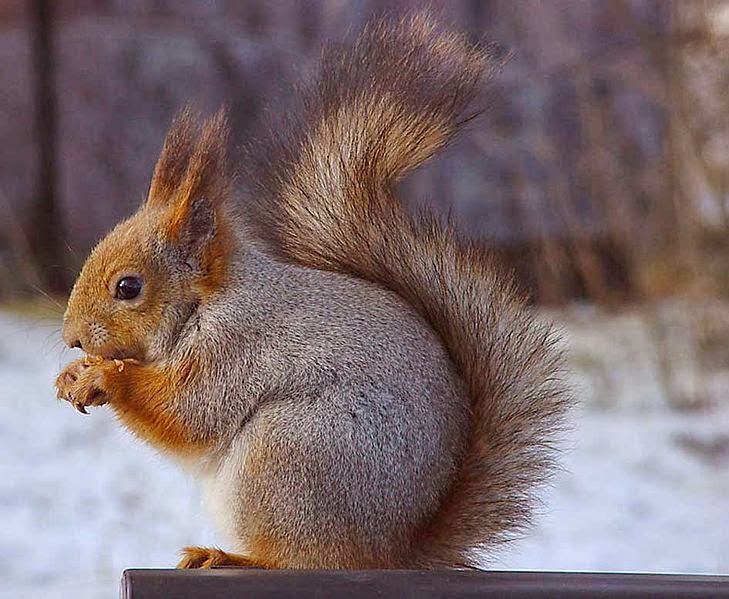 The Eurasian red squirrel exhibits an unusal degree of variability in its appearance both geographically and by season. In general, the head and body is 7.5-9 inches in length, with the tail adding an additional 6-9 inches--a bit smaller than the eastern gray squirrel. The coat can range from very light red, like the squirrel above, to almost black. Throughout much of its range red squirrels of many different shades can be found coexisting within a fairly small area. The underside is generally white or cream in color. The coat changes twice a year, with, predictably, a thinner coat in summer and a thicker coat in winter. Perhaps the most distinguishing physical feature of this squirrel is the ear tufts, which are generally larger in winter. 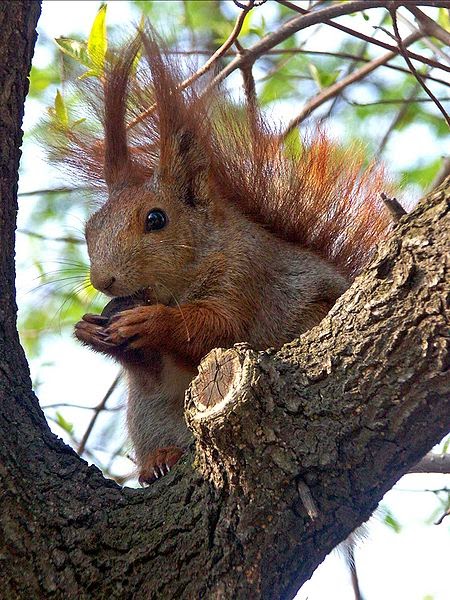 Like most tree squirrels, the Eurasion red squirrel may nest either in a tree cavity--often an abandoned woodpecker hole--or in a drey made of sticks and leaves and placed in a fork high in a tree. Mostly solitary except when raising young, several red squirrels will nevertheless share a drey during cold winter weather to better keep warm. Mating takes place in late winter, and often again in summer. Litters usually contain 3 or 4 young, which are cared for by the mother until about 8-10 weeks old. 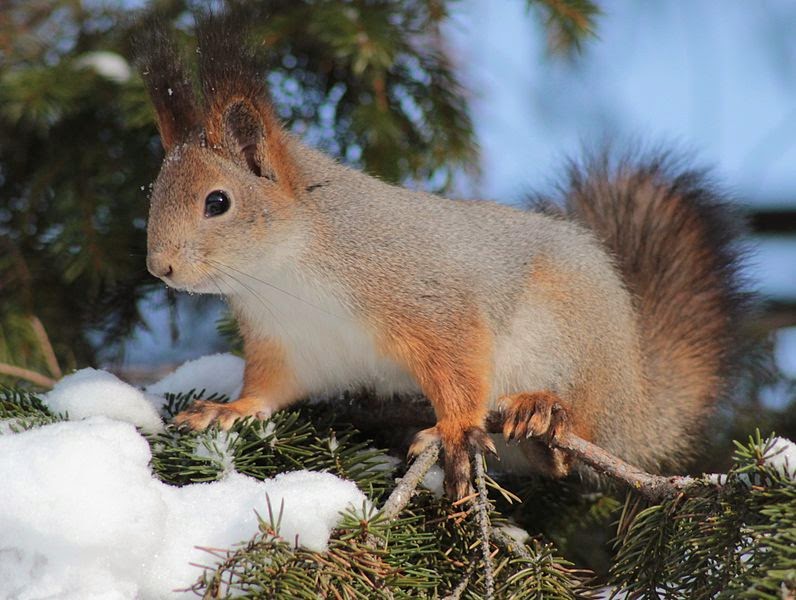 The Eurasian red squirrel is not considered threatened over most of its range. However, in a few areas their numbers have dwindled. These areas include England, Ireland, and Italy, where eastern gray squirrels have been introduced. While the gray squirrel has been villified in these areas, especially in the British Isles where culls of gray squirrels have been carried out in many areas, it is clear that habitat loss has also played a large role in the decline of the red squirrels. I have discussed my opinions about this issue elsewhere on this blog.

The Eurasian red squirrel, common in the Scandanavian countries, figures prominently in Norse mythology. The squirrel Ratatoskr (translated "drill tooth") is found in written compilations dating to the 13th century, running up and down the world tree Yggdrasil, carrying messages and insults between the eagle at the top and the serpent below. 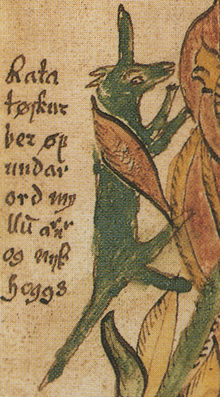 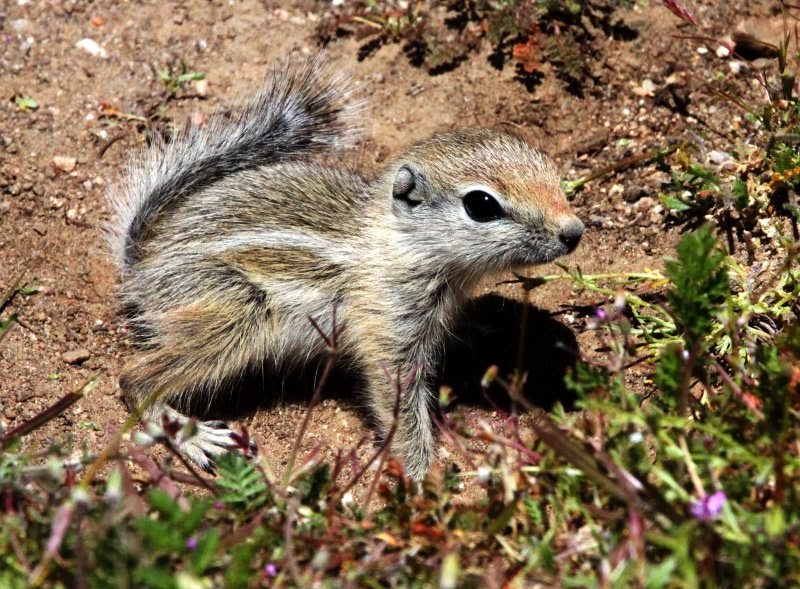 San Joaquin antelope squirrels are omnivorous. Their prefered foods include vegetation, fungi, seeds, and insects, especially grasshoppers. Green vegetation makes up most of their diet from December through April, when this food is most abundant. During the remainder of the year insects may make up 90 percent of the squirrels' diet. Vegetation and insects are prefered over seeds, probably because they provide greater amounts of water, which is vital in an arid climate. They are diurnal, or active during the day, and usually forage for food in the early morning and the evening, especially in the summer when they will retreat to their burrows during the hottest part of the day. These squirrels are not tolerant of extreme heat, but do very well in colder weather and do not hibernate during the winter. 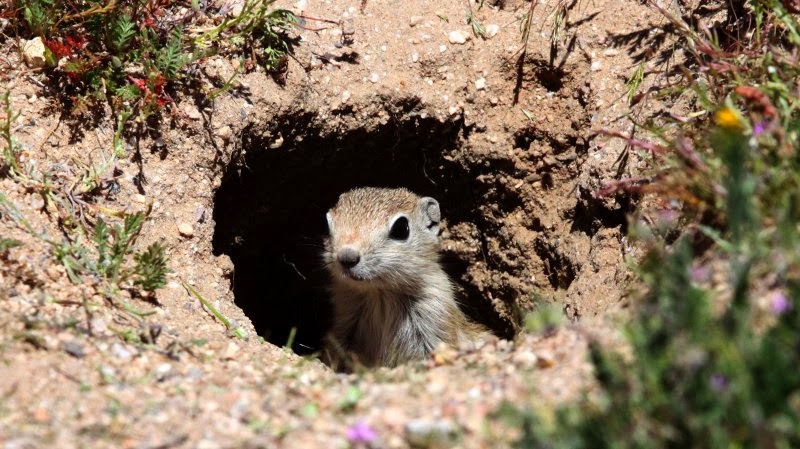 San Joaquin antelope squirrels live in small groups of about 6-8 individuals. They either dig their own burrows or, perhaps more often, use abandoned burrows of kangaroo rats. They breed once each year, with the births taking place in March or April. Young first leave the nest about 30 days after birth. 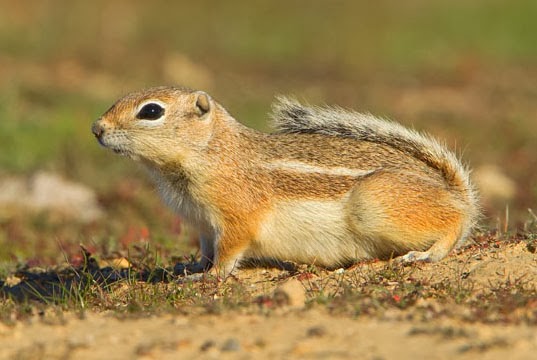 Sadly, the San Joaquin antelope squirrel is an endangered species. Its range has been reduced by about 80 percent by agriculture, petroleum development and urban sprawl. In addition, the use of pesticides in commercial agriculture may be reducing the supply of insects, one of the squirrels' most important foods. And some of their most important vegetable foods are being displaced by invasive plant species. Currently the species survives only in two areas of the San Joaquin valley. One of these areas, the Carrizo Natural Area, is protected public land. Nevertheless, this small ground squirrel faces a precarious future unless strong steps are taken to protect and expand its remaining habitat. 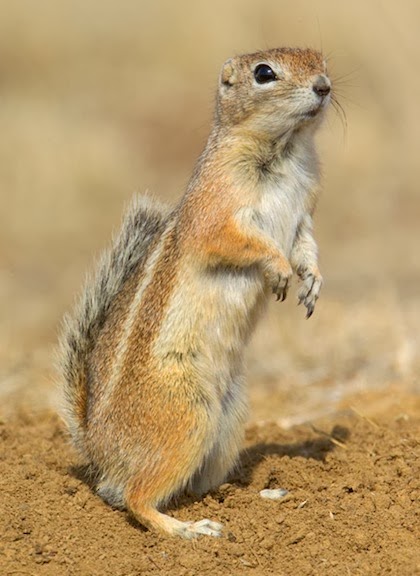