Squirrel Facts: The Himalayan Marmot and the "Gold-Digging Ants"

The Himalayan marmot is found at higher altitudes than almost any other mammal on earth. This ground squirrel lives in parts of India, Nepal, Pakistan, Tibet, and southern China, at elevations ranging from 3500-5200 meters (11,500-17,000 feet). It is about the size of a small house cat, with chocolate-brown fur and yellow patches on its face and chest. 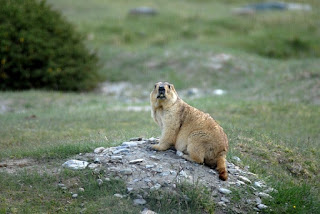 Like most ground squirrels, Himalayan marmots live in colonies. The size of the colonies vary depending on the resources available. They typically inhabit high, arid meadows and steppes. They dig unusually deep burrows, probably to protect them during hibernation from the harsh conditions of the Himalayan winter. 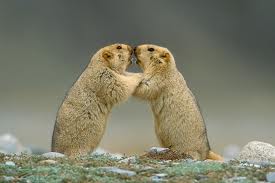 There is an interesting story told by the ancient Greek historian Herodotus, which scholars now believe may involve the Himalayan marmot. Herodotus (484-425 BC), who traveled in and wrote about the Persian empire, wrote about a strange species of large, furry "ants" that lived in far eastern regions of that land. These ants, he had been told, lived in an area covered in sandy soil with a high content of gold dust. They would dig burrows under the ground, and the people who inhabited that region would follow behind and collect the gold dust that the ants unearthed.

Recently, ethnologists have suggested that the furry "ants" that Herodotus had heard about were actually Himalayan marmots. There is a region in northern Pakistan, the Deosai Plateau, which has a sandy soil rich in gold dust, just as Herodotus described, and which is populated by Himalayan marmots. And the people of that region, a tribal group called the Minaro, do indeed collect the gold dust unearthed by the marmots. And in Persian, the word for "marmot" is similar to the word for "ant." So Herodotus, relying on translators for the stories he collected on his travels, may have been confused by the similarities in these words.


Whatever the truth may be behind this story, the Himalayan marmot is a fascinating creature, just like squirrels the world over.
Posted by Dan H at 7:37 PM 6 comments:

This excellent recent essay on the Chattanooga website Nooga.com notes an apparent absence of gray squirrels in that city, and ponders the possibility that this trend could be related to climate change.

The author, Jean Lomino of the Chattanooga Arboretum and Nature Center, does not reach any firm conclusions, but raises a significant issue, reminds us of the importance of every species and our responsibility to understand and protect the entire web of nature.

It's strange and sobering to think of the possibility of the southeastern US without its gray squirrels. 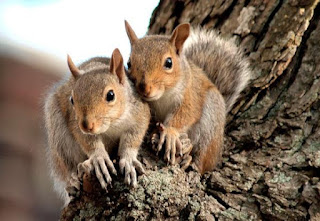 The town of Longview, WA is known for its fondness for squirrels. This statue occupies a prominent place in the town... 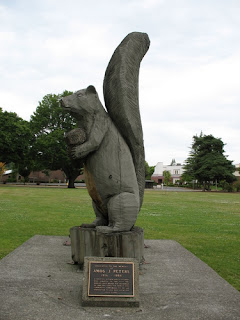 And the Nutty Narrows bridge, designed and erected years ago by a local businessman after he witnessed a squirrel being run over in the street, helps local squirrels cross a busy roadway in safety... 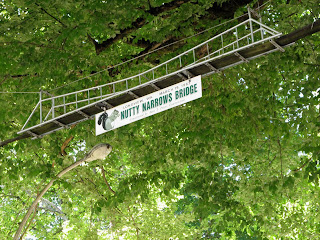 And today the town is holding its annual celebration in honor of its furry neighbors, Longview Squirrel Fest. This is an event that I truly wish I could attend, if it wasn't for the distance and lack of money! The annual celebration, started last year, offers a full daylong slate of fun activities, performances, food and drink, and demonstrations from vendors. And best of all, each year at Squirrel Fest a new squirrel bridge will be unveiled, all to make life safer and happier for the town's beloved squirrels. 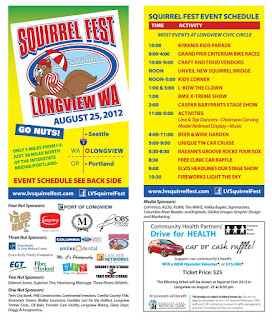 And just in case anyone doubts whether the squirrels actually use the bridges, here's proof...

Continuing on the topic of squirrels and global warming, a study just released by the University of California-Berkeley looks at how climate change is affecting the Belding's ground squirrel (note that this article discusses two studies; the study concerning the ground squirrels is covered in the second half of the article).


The Belding's ground squirrel lives in mountainous areas of western North America. Its range covers parts of northern California, Oregon, Washington, Idaho and Nevada. This medium-sized squirrel prefers high meadows and brushy areas with an ample supply of vegetation and water. Related female squirrels live and interact together in colonies, while the adult males are nomadic. 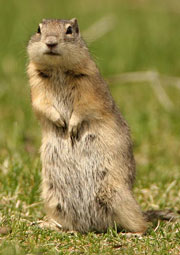 The study that I linked to at the beginning of this post looked at the movements of populations of the Belding's ground squirrel in response to global climate change. The authors of the study found that the squirrels had disappeared from more than forty percent of the areas that they had been recorded in the early part of the twentieth century. The disappearances were most common in higher-elevation areas that have experienced pronounced increases in temperature and rainfall in the past century. This finding was a surprise to the researchers, as the species has not been considered to be threatened and was in fact thought to be quite common. On the other hand, the Belding's ground squirrel has increased in some areas that have been modified by humans.

Although the Belding's ground squirrel is still not considered to be under serious thread, the unexpected declines demonstrate clearly how serious and complex an issue climate change is.
Posted by Dan H at 7:29 PM 2 comments:

The Columbian ground squirrel is found in high meadows and grasslands of eastern British Columbia and western Alberta in Canada, and parts of Oregon, Washington, Idaho, and Montana in the United States. These ground squirrels live in colonies, spending four to five months of the year eating grasses, leaves, bulbs, fruits and seeds, and raising their litters of three to five young. 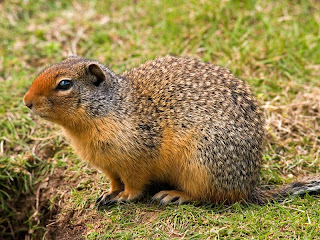 The other seven or eight months they spend hibernating. Each squirrel's burrow has a hibernation chamber. Columbian ground squirrels may begin hibernation in some areas as early as July. During the warm months, each squirrel puts on sufficient fat to survive the winter, and gathers seeds and bulbs in its burrow to eat when it wakes up. When hibernation begins the squirrel will seal the chamber with a plug of dirt. It will not emerge until the following spring.


Now research is suggesting that global climate change is altering the hibernation patterns of the Columbian ground squirrel, with troubling implications. A team of scientists followed a group of female squirrels in Alberta over a period of twenty years. They have found that by 2011, the squirrels were emerging from hibernation an average of ten days later than at the beginning of the study.

The researches believe that the reason for the later emergence is a trend toward wetter, snowier winters in the region. They believe that the squirrels can detect the presence of snow cover from inside their hibernation chambers. Global warming is creating favorable conditions for later snowfall, and as a result the squirrels hibernate longer and emerge later.

The troubling aspect of this research is that with the longer hibernation, fewer of the ground squirrels are surviving the winter sleep. At the beginning of the project, twenty years ago, 87 percent of the female squirrels survived the winter hibernation. By 2011, only 67 percent of the females that entered hibernation emerged the following spring. The scientists aren't sure of the reason, but speculate that the shorter period above ground means that there is less time for the squirrels to put on the body fat required to survive the winter. 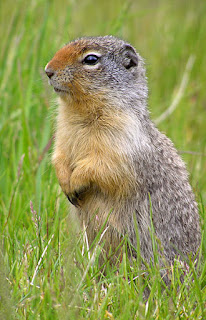 Whatever the reason, the fact is that fewer of these ground squirrels are surviving their winter hibernation, and this trend is not likely to reverse any time soon. It is one more piece of evidence of the damage that human-created climate change is doing to our planet.

Addition: Here is another, more detailed article about the Columbian ground squirrel study. It gives more information on the relationship between emerging later from hibernation and the increased failure of the squirrels to survive. It also gives a more complete explanation of the relationship between climate change (global warming) and increased late-winter and early-spring snowfall.
Posted by Dan H at 12:16 PM 3 comments:

The woolly flying squirrel is one of the rarest and most endangered squirrels in the world. It had not been seen by westerners since 1924, and was believed to be extinct before it was rediscovered in the summer of 1994 by an American zoologist working in a remote valley of Kashmir in the far north of Pakistan.

A few years later, in 2004, Vladimir Dinets videotaped a woolly flying squirrel at night near Nanga Parbat, Pakistan. Here are a couple of still shots of the squirrel:

Very little has been documented about the woolly flying squirrel's life and habits. It is the largest species of flying squirrel. Its body is two feet long, and the tail an additional two feet. Nevertheless, it is able to glide gracefully among the cliffs, rocks, and trees of its mountain habitat. It has a bushy tail and long, thick fur that gives it a "woolly" appearance. It feeds on pine needles and other abrasive plant material. It lives in high-elevation pine forests in the Himalaya mountain region, generally near cliffs, caves, and rocky crevices in which this nocturnal squirrel takes shelter during the day. 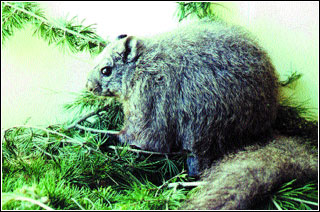 The survival of this squirrel was in doubt among western scientists for decades, due to the remoteness of its habitat. However, residents of the northern Pakistan region where it lives have a number of interesting beliefs concerning the woolly flying squirrel. Its urine is said to be a powerful aphrodisiac. And the cry of this squirrel is believed by some to signal the impending death of a loved one.

Like many other critically endangered animals, this mysterious and elusive squirrel faces an uncertain future. Habitat loss and global warming will certainly threaten its survival well into the future. We can only hope that something can be done to save this fascinating creature.
Posted by Dan H at 8:24 PM 8 comments: