What Do Squirrels Do In The Winter?

As cold weather sets in and we complain about the freezing temperatures during our morning drive to work, it's easy to forget that wild animals have to deal with the winter weather without the benefit of heated homes and cars. Squirrels, like all other animals that live in cooler climates, have evolved a variety of strategies to deal with the winter cold. Of course, the specific strategies depend on the kind of squirrel, and the area where the squirrel lives, so it's not surprising that squirrels have a variety of behaviors to help them survive the winter months.

One of the most widespread misconceptions about squirrel behavior is that all squirrels hibernate during the winter. The truth is that while many ground squirrels do hibernate, tree squirrels and flying squirrels do not. This detail was apparently missed by the producers of Sponge Bob Square Pants, who depicted Sandy Cheeks, the seafaring eastern gray squirrel from Texas, sound asleep for the winter.


For real-life tree squirrels, the most familiar behavior for coping with winter is caching food. The eastern gray squirrel of North America is famous for its habit of burying acorns and other nuts. Facing competition for scarce food supplies from nearby squirrels and other animals, the gray squirrel caches nuts over a wide area during the fall, a technique known as "scatter hoarding." It bites and licks each nut, leaving its scent before burying it. The squirrel retrieves the buried nuts throughout the winter using both memory and its keen sense of smell. It is said that a gray squirrel can locate a nut by scent even through a foot of snow.


Squirrels have refined their caching techniques to reduce the number of nuts stolen by other animals. They have been observed pretending to bury nuts when they detect another squirrel or other animal nearby, attempting to throw off any potential nut thieves.

Other tree squirrels have different strategies for winter food caching. The American red squirrel inhabits coniferous forests of the north, where it feeds largely on seeds from spruce cones throughout the winter. Rather than scatter hoarding like its gray cousins, the more fiercely territorial red squirrel gathers cones into a central location, or "midden," in its territory. The pile of discarded leaves from the spruce cones can sometimes measure a meter or more across.


Although they do not hibernate, tree squirrels and flying squirrels will reduce their activity and spend more time in their nests during the winter months. In colder climates, squirrels will often alter the timing of their daily routines. Instead of going out to find food in the early morning and near dust, they will leave the nest in the mid-afternoon to retrieve buried nuts, and stay curled up in their nests the rest of the time. A small supply of nuts may be stored in the nest so that during a particularly cold stretch, a squirrel may be able to stay in the nest without leaving at all for a day or two.

Tree squirrels and flying squirrels are territorial, and adults normally nest alone. But when cold weather sets in, often several squirrels living near each other will gather in one nest, temporarily, to share their body warmth. When warmer weather returns, the squirrels will part ways and return to their own individual nests.

Unlike tree squirrels and flying squirrels, many ground squirrels (which includes chipmunks, prairie dogs, and marmots) do hibernate during the winter. Not surprisingly, the ground squirrels of colder climates are the most likely to hibernate, and the length and timing of hibernation varies by climate. Squirrels of higher elevations, such as the Alpine marmot of Europe or the Belding's ground squirrel of western North America, may have extended hibernation periods lasting as much as eight or nine months.

Squirrels inhabiting similar territories may employ sharply different hibernation behaviors. For example, the thirteen-lined ground squirrel, a very small species whose territory extends from southern Canada south to central Texas, may enter hibernation anywhere from late July to October, and emerge between March and May, depending on the local conditions. By contrast, the black-tailed prairie dog, a larger ground squirrel which has a similar range to the thirteen-lined ground squirrel, does not hibernate at all, but may go into a light hibernation-like torpor in its burrows for short periods during particularly cold weather.


The champion of hibernation among the ground squirrels may be the Arctic ground squirrel. Found in Alaska and northern Canada, these squirrels live in colonies that may number in the hundreds. They spend the short spring and summer eating and gathering food to store in their underground tunnels. They hibernate from September until April in burrows that are lined with lichen, leaves and muskox hair. During hibernation, the Arctic ground squirrel's body temperature drops to 27 degrees F (-3 C), the lowest naturally occuring body temperature recorded for any mammal. When they awaken in April, the squirrels feed on the stored leaves, seeds, and grasses that they stored in the burrows until spring plants start to grow outside.


Squirrels are an amazingly adaptable and varied family of animals. They can be found in some of the harshest climates on earth. I have touched here on just a few of the strategies that squirrels employ to survive the winter months. Of course, our familiar city gray squirrels are always willing to accept a little help from their friends. 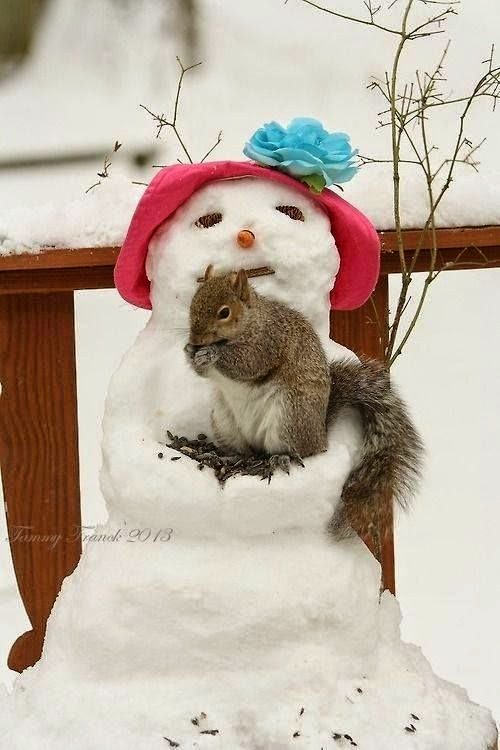