The European ground squirrel, also called the European souslik, is one of only two species of ground squirrels that inhabit Europe. Its range covers parts of eastern and southeastern Europe, including Poland, southern Ukraine, the Czech Republic, Slovakia, Serbia, Romania, Austria, Greece, Bulgaria, and Macedonia.

Like most ground squirrel species, European ground squirrels are diurnal (active during the day), and live in colonies made up of individual burrows. Their favored habitat is short-grass steppe, pastures, lawns, or park land. This squirrel is gray or yellow-gray in color, with a body about 8 inches long and the tail slightly over 2 inches. 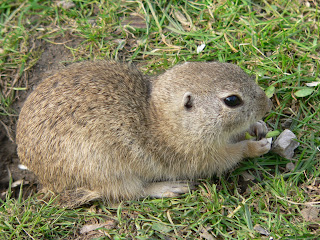 This species eats a primarily herbivorous diet made up of grasses, roots, and seeds, along with some insects, which they carry in their cheeks to eat in the safety of the den. During foraging, some individuals act as sentinels, alerting the colony to danger with a whistling call. They hibernate from autumn until March, with the exact length of the hibernation varying by location depending on the severity of the winter.

Unfortunately, the European ground squirrel is threatened and has declined or disappeared over much of its range. It was declared extinct in Germany around 1985, and had also completely disappeared in Poland although it has since been reintroduced in that country. The primary reason for its disappearance has been the conversion of its meadow and grassland habitat into cultivated farmland. However, in some areas of Bulgaria and Romania, populations have stabilized or increased since the 1980s as agricultural intensity has reduced with the fall of former communist governments. 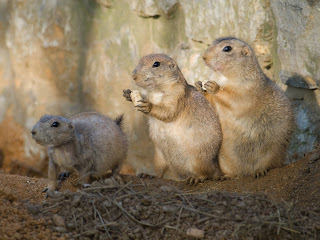 The European ground squirrel has been in the news recently in Vienna, Austria, where a colony of the threatened squirrels is delaying the construction of a new apartment complex. Officials in the city are trying to lure the animals away from the site by designing and constructing a new park nearby. The fifteen acre park will include "a wide range of flowers and herbs" that designers hope will induce at least half of the ground squirrels to move voluntarily, after which the remaining squirrels will be persuaded through the use of "light pressure" (what this would involve is not explained).

Of course, one might think that a more obvious solution would be to build the apartments on the site of the planned park, and let the ground squirrels stay where they are. 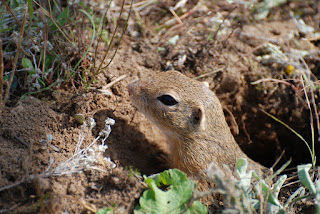 Why Did The Flying Squirrel Cross The Road?

In 2002, concerned scientists noticed that northern flying squirrels were unable to cross a stretch of scenic highway in the Unicoi Mountains of western North Carolina. This was a problem because the flying squirrels, which are declining in numbers, were unable to access foraging sites and get to others of their species for mating.

The Carolina northern flying squirrel is an endangered species that inhabits mountain forests of North Carolina, Tennessee, and Virginia. The nocturnal squirrels glide by launching themselves from a tall tree, and can typically cover distances of up to about 80 feet. But the highway, along with an adjacent treeless area on both shoulders, created a space 125 feet wide, too much distance for the squirrels to cover.


Fortunately, biologists from the North Carolina Wildlife Resource Commission and North Carolina State University came up with a creative solution to this problem, and it seems to be working. The scientists have installed three pairs of wooden poles about 46 feet high, with launching platforms at the top of each pole. The poles in each pair are situated about 49 feet apart, on each side of the road. This gives the squirrels the means to launch themselves across the highway to find food, den sites, and mates.


To test whether the flying squirrels were using the platforms, the research team set up cameras at the poles for a 15 month period in 2009 and 2010. During this time, they captured 14 instances of the squirrels using the poles. Here is a video showing one of these instances:

It would be nice if the success of this project could lead to similar efforts in other locations. I have written about the squirrel bridges in the town of Longview, Washington, a very successful example of helping squirrels to avoid the dangers of road crossings. Unfortunately, not every effort has been so successful. In 2010, a proposal to erect rope bridges across two highways in Arizona to help the endangered Mount Graham red squirrel was defeated by that state's legislature, due to protests from right-wing politicians who objected to the cost. Hopefully Arizona's politicians will have a change of heart before it's too late for that threatened species.
Posted by Dan H at 6:56 PM 5 comments: