Who Is Your Favorite Animated Squirrel?

Although the most popular cartoon characters seem to be cats, mice, and birds, a few animated squirrels have entertained us through the years. I present here some of the most popular cartoon squirrels, starting with Chip and Dale in the 1940s through Sandy Cheeks. If you look on the sidebar to the right of this post, you will find a poll where you can vote on your favorite.

Because I am focusing on cartoon squirrels seen primarily on television, I am not including the popular prehistoric squirrel Scrat from the "Ice Age" films, which I have not seen. I am also not including any characters from last year's film "The Nut Job" which received poor reviews and was not a big box office success.

Chip and Dale
The two Disney chipmunks made their first appearance in the short film "Private Pluto" in 1943. Most of their early appearances were as antagonists to either Pluto or, more often, Donald Duck. Only three shorts were made featuring Chip and Dale as the principle characters, all of these in the early 1950s. In 1989 the pair were given their own series, "Chip 'n Dale Rescue Rangers."

At first nearly identical, eventually minor differences in appearance were added--Chip given a smaller black nose, smoother head fur, centered front teeth, and slightly darker color--so that viewers could more easily tell the two apart. One feature that both Chip and Dale lack is the facial stripes which are characteristic of all real chipmunks. 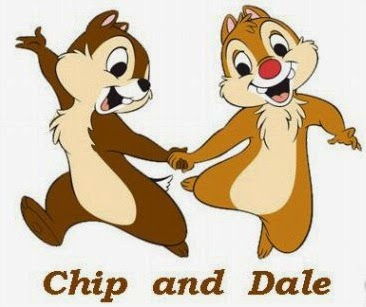 Rocket J. Squirrel
Arguably the iconic animated squirrel, and a favorite from my own childhood, Rocky the Flying Squirrel made his debut in 1959 on "Rocky and His Friends," which later became "The Bullwinkle Show" (today both shows are routinely referred to as "The Rocky and Bullwinkle Show"). Rocky was the highly intelligent but somewhat naive and oddly effeminate "straight man" to his amiably goofy best friend Bullwinkle J. Moose. One of the most well-known routines involved Bullwinkle attempting to pull a rabbit out of a top hat, to which Rocky replied "that trick never works!" The pair also took part in adventures that pitted them against their foes Boris Badenov and Natasha Fatale.

Although billed as a "flying squirrel," Rocky bears little resemblance to the actual mammal, and does not appear to possess a patagium (the skin flap between the fore and hind legs that allow flying squirrels to glide). He does, however, have flying skills that any real flying squirrel would envy, darting through the air and even rocketing between cities. 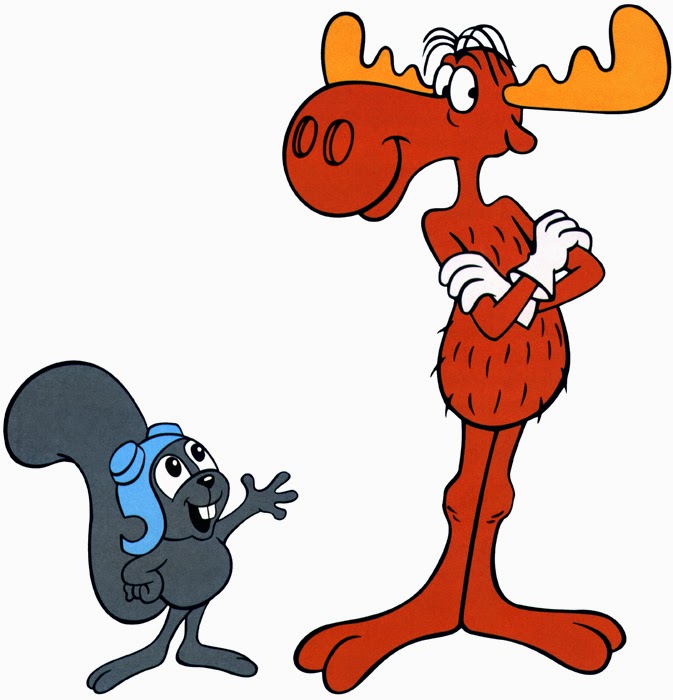 Secret Squirrel
A spoof of the popular James Bond movie franchise, Secret Squirrel debuted in 1965 on the "Atom Ant/Secret Squirrel Show." He received his own show the following year, only to be reunited with Atom Ant for one more year in 1967. An updated version of Secret Squirrel ran on "2 Stupid Dogs" starting in 1993.

Secret Squirrel, also known as Agent 000, is a hat-and-trenchcoat-wearing spy who, along with his sidekick Morocco Mole, fights international agents of crime and intrigue using both his intelligence and a collection of guns and gadgets. 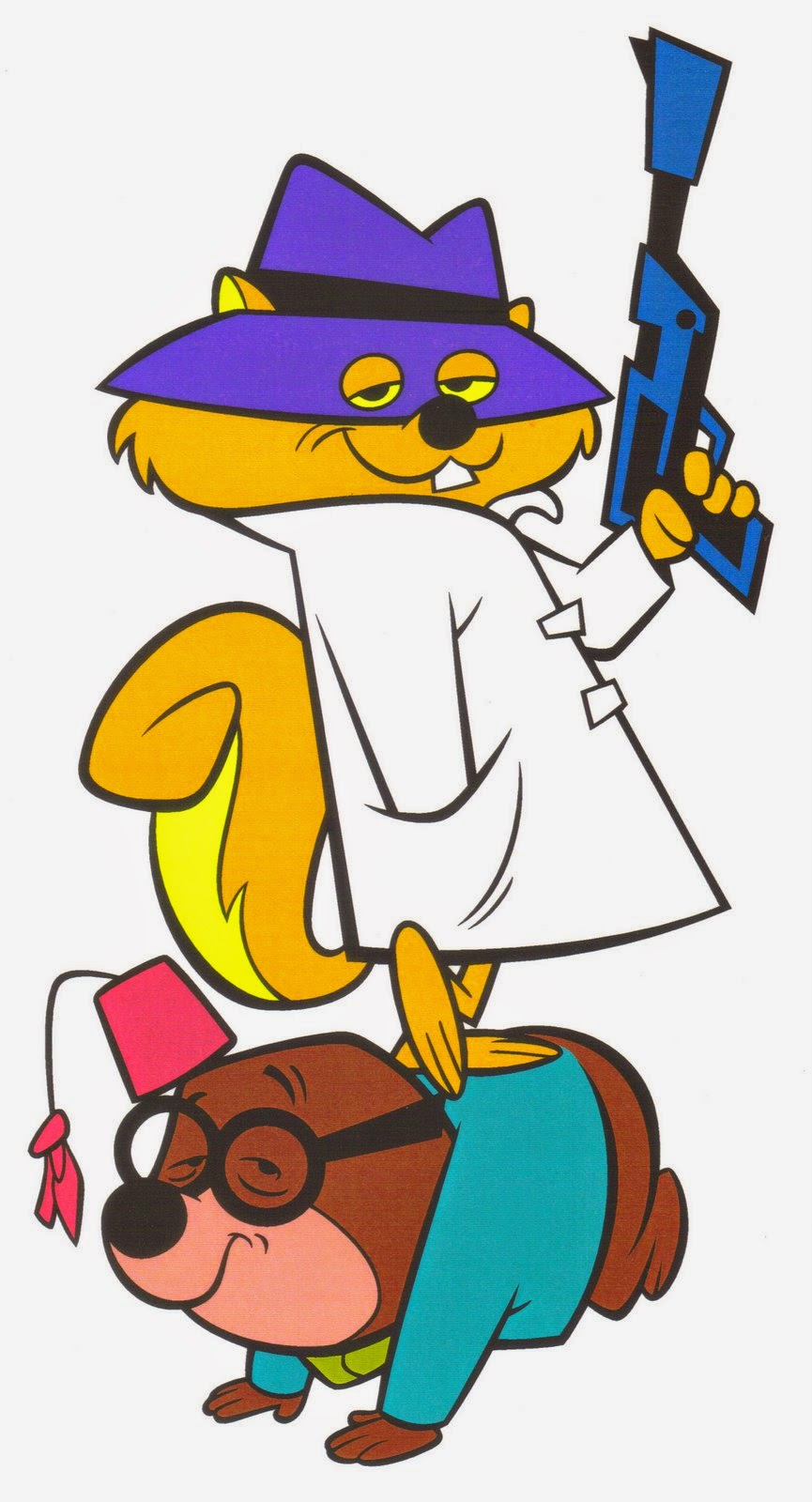 Slappy Squirrel
Slappy Squirrel and her nephew Skippy were recurring characters on Animaniacs, which ran from 1993-1998, first on Fox Kids and then on The WB. Reruns continue to appear on various networks to this day. Slappy is presented as an ex-Looney Tunes star whose career has faded. Now a grumpy, somewhat bitter middle-aged squirrel, she lives in a tree with her young nephew who idolizes her. She faces both old foes and everyday annoyances, usually relying on exagerrated and chaotic cartoon violence to solve any and all problems. Like most of the Animaniacs segments, Slappy Squirrel is a fond spoof of old cartoons and movies. 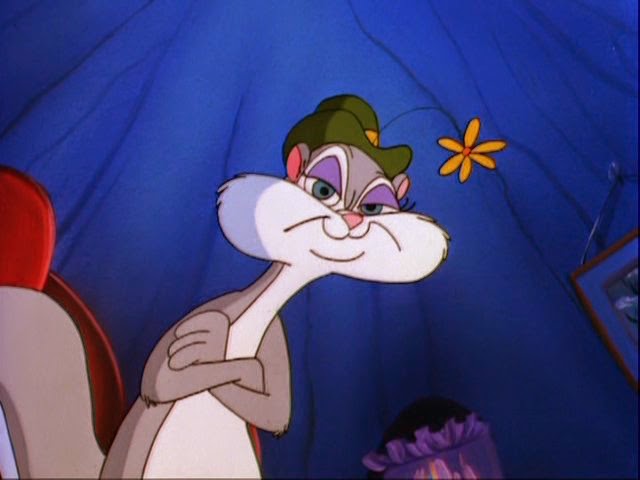 Sandy Cheeks
Sandy Cheeks, who has appeared on "Spongebob Squarepants" since its debut in 1999, is arguably one of the most improbably characters in the history of animation, which is really saying something. An eastern gray squirrel from Texas, she lives in the underwater community of Bikini Bottom with a variety of fish and other marine life, and one yellow household sponge. Sandy lives in a dome, and when moving about underwater she wears a dive suit with a helmet. The source of her oxygen is not clear. The reason for her residence in Bikini Bottom is apparently some sort of scientific research.

Generally Sandy is portrayed as friendly and good natured, but she can also be vindictive and even violent, especially if someone insults Texas. There is a tree inside her dome where she sleeps, and in one episode she is seen hibernating, which tree squirrels in nature do not do. 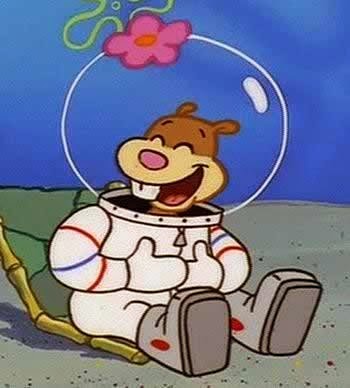