Gray squirrels usually mate in late winter or early spring. Several males will compete for the privilege of mating with a single female. The males will chase each other around and through trees, jumping from branch to branch, until the female chooses the male that she likes most. The losing males will then leave, and the winning male will follow the female until she is ready to mate. After the mating is completed, the male returns to his own territory, and the female is left to carry, give birth to, and raise the young by herself.

The gestation period for gray squirrels is 44-46 days, and the litter is usually four to six babies. The mother will nurse her young for about ten weeks. During that time the young will not leave the nest. 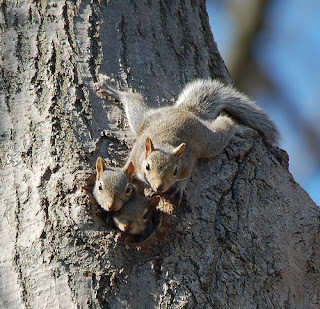 At about ten to twelve weeks old, the young will venture out of the nest for the first time. The mother will teach the young squirrels the skills that they will need as adult squirrels, such as nest building, finding and storing food. They will live for several months as a family unit. This is the time when you will often see the young squirrels chasing each other around yards and parks, running after each other up and down and around trees.

Eventually, in early fall, the young squirrels will leave to establish their own nearby territories. The mother squirrel will go back to living alone until she mates again and raises another litter of young. 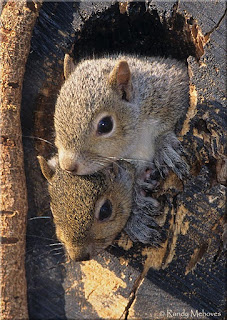