Brevard, North Carolina, a mountain town about 120 miles west of Charlotte, is the home of possibly the largest colony of white squirrels in North America. These squirrels are not albino, but a white subspecies of the common gray squirrel, with black eyes. There are other towns with white squirrel colonies, including Olney, IL, Marionville, MO, and Exeter, Canada, but Brevard's is by far the largest at around a thousand squirrels. In 1986 the entire town was designated as a squirrel sanctuary. There is an annual White Squirrel Festival every May, and the White Squirrel Institute at Brevard College holds a white squirrel count every October. There's even a White Squirrel Shoppe.

The local legend is that the white squirrels came to Brevard when a circus truck overturned in the 1950s. There is some doubt about this story--they may have simply descended from a pair of pet squirrels that escaped. Whatever their origin, the white squirrels have become a local tourist draw, and I hope to be able to go and see them sometime soon. 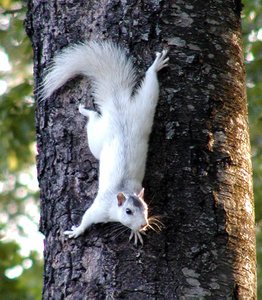 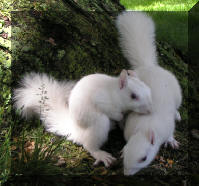