Petition to Help Save the Ground Squirrels and Gophers in Berkeley, CA

I am happy to say that there is now a petition that you can sign at the Care2 website to help save the California ground squirrels and gophers at Cesar Chavez Park in Berkeley, California. I wrote yesterday about the impending extermination of these animals which local park officials say is necessary because their burrowing may release toxins into the bay. Please click below and take a look at the petition and consider signing to prevent this cruel, drastic, and extremely dubious measure.

The city of Berkeley, California is known as a center of tolerance and compassion, but a recent proposal by the city government goes against that image. The city is planning the mass extermination of ground squirrels and gophers in Cesar Chavez park. The park, which overlooks the San Francisco Bay, is built over a reclaimed landfill, and city officials are concerned that the burrowing squirrels might release dangerous toxic chemicals that could spill into the bay. So the city has hired an extermination company to trap and kill many, though not all, of the squirrels and gophers that inhabit the park.

As described in this story about the impending slaughter, when the park was built, the landfill was enclosed by layers of clay underneath, on the sides, and on top. The top layer of clay was covered with a layer of topsoil, which is what the squirrels and gophers have been digging into. As of yet, there has not been a problem with the rodents penetrating the clay that protects the landfill. But apparently, as the population of squirrels has increased, city officials have grown concerned that they might burrow right through the clay. If this happens, chemicals that are no doubt contained in the landfull could spill into the nearby bay.

The potential problem has been exarcebated by human visitors to the park who ignore signs warning them not to feed the squirrels, further increasing the population of the animals. The squirrels and gophers cannot be relocated as this would violate state laws that prohibit the relocation of any wild animals. Berkeley officials say that they have tried less extreme measures such as luring birds of prey into the park by providing nesting boxes and perches, but this did not help. And poisoning is not an option because it would affect other species.

There can be no doubt that protecting the San Francisco Bay from pollution has to be a priority, but the articles that I have read about this issue raise a number of bothersome questions. Is it not possible to upgrade the barrier that surrounds the landfill, perhaps by increasing the thickness of the clay cap or adding another material to enclose it? Is the extermination of the squirrels and gophers to go on indefinitely, and at what cost? Surely park officials are aware that any individuals killed will be quickly replaced by others that move in from the surrounding area and by breeding.

There are several other waterfront parks in the area that are also built over landfills, that also have large populations of ground squirrels, but for some reason at the other parks the potential release of toxins is not considered a problem. What makes conditions at the other parks so different? It seems to me that the Berkeley city officials need to more fully explain why this drastic measure is necessary, and investigate more fully what other steps could be taken short of killing potentially thousands of animals.

If the problem here really is the result of humans feeding the squirrels, then maybe the land in question should be closed off and turned into a wildlife preserve instead of a public park.

Update: I've put a link below to a petition that has been created to stop this drastic and cruel measure. Please click below to view and consider signing the petition! 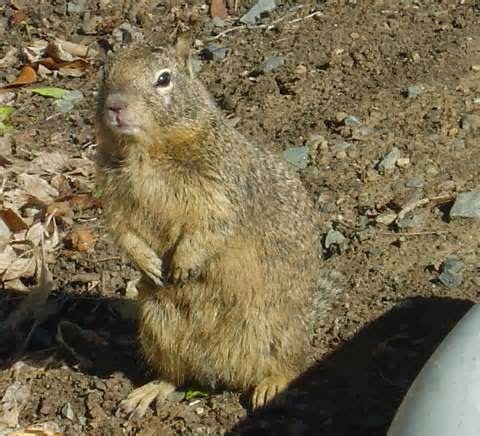 An Amazing Novel About Squirrels

I just finished reading an outstanding novel about squirrels and other animals. Beasts of New York by Jon Evans is the story of Patch, a squirrel who lives in New York's Central Park. Patch wakes up one winter morning to discover that all of the food that he and the other park squirrels have stashed have vanished, leaving him, his family and tribe to starve. Patch's quest to uncovery the mystery behind the disappearance of the food suppy leads to an epic journey of discovery, the uncovering of dark, malevolent forces at work that threaten the peace, and the very survival of the park's squirrels and other animals. Along the way, Evans creates a unique, compelling, and sometimes troubling view of a familiar landscape as seen through the eyes of Patch and his fellow Central Park creatures.

I will be posting a full review of Beasts of New York in the next few days. In the meantime, you can click below to go to the Amazon.com page for this wonderful book.