In the wake of the horrific Holley Squirrel Slaughter that I have written about, I have started a petition on Care2 asking the legislature of my home state, Texas, to ban all animal kill contests. You can click on the link or sign using the widget on the right hand side of the page. 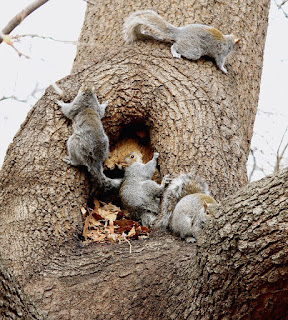 Is it possible that global warming could be causing the creation of new species of squirrels and other animals? According to a story on the Mother Nature Network website, climate change may be the cause for increasing numbers of hybrid flying squirrels being found in Canada.


This is certainly not the first example of hybridization between species. The story cites the example of cross-breeding between grizzly bears and polar bears, which may also increase with the effects of global warming. But Bowman and other scientists believe that the flying squirrels are the first documented case of a hybrid species specifically caused by human-generated climate change. It is not clear what the long-term impact of hybridization might be for the flying squirrels or other species. Might a new flying squirrel species created by cross-breeding be better adapted to deal with a warmer climate? It's too soon to tell.
Posted by Dan H at 12:21 PM 7 comments:

Today, in Albany, New York, wildlife rehabilitator Carrie Leo is presenting almost 15,000 petition signatures at a news conference with NY state senator Tony Avella. The petition asks the village of Holley, NY and the Holley Fire Department to cancel its annual "Squirrel Slam," the fundraising event at which "hunters" will compete to kill squirrels. Prizes will be given in adult and youth categories to those who kill the heaviest squirrels, and in a separate drawing after the hunt, firearms will be awarded as prizes.

With less than a week to go before the bloodbath, the town seems to have dug in its heels and resisted the massive public call to stop the event. There has even been an effort to raise money for the fire department to replace the funds that it would lose if it did cancel the hunt.


What I am afraid that many of the supporters of the Squirrel Slam do not understand (or refuse to acknowledge) is that the protest is not about taking away their right to hunt or to own a gun. While I am sure that many of the protesters, myself included, do support common sense gun control measures, that is a separate issue. This protest is not about banning hunting, where a reasonable number of animals are taken for food. It is about holding a contest to kill as many squirrels as possible, for no purpose other than to win prizes. It is about encouraging children to think of pointless, purposeless killing as a fun way to spend an afternoon. It is about a culture that cheapens and trivializes life and death.

I still hold out hope that the town of Holley will  listen to the voices of all who are speaking out and decide to cancel the Squirrel Slam. If this year's event does go on, I hope that the powers that be in the town will quietly reconsider and find a more humane fundraising event for next year and future years going forward. And I hope that other communities that hold similar cruel and callous killing contests will look at the outcry over the Squirrel Slam and know that they too will risk the same negative spotlight of attention if they continue holding these events.

Update: Here is an account of Senator Avella's press conference that was held this afternoon.

Here is another account of the press conference, with video.
Posted by Dan H at 2:47 PM 9 comments:

The Mount Graham red squirrel has been listed as an endangered species since 1987, after having previously been thought extinct. It lives a precarious existence in a small area of Arizona, where it numbers only slightly above 200 individuals. Now it appears that a long-planned captive breeding program at the Phoenix Zoo may finally be nearing approval from the US Fish and Wildlife Service. 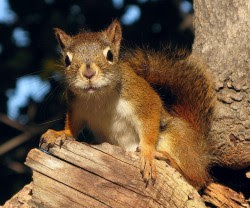 This small subspecies of the North American red squirrel lives in high-elevations conifer forests in the Pinaleno Mountains of Arizona, where it has been isolated from other red squirrels for over ten thousand years. Its numbers have declined due to habitat loss, drought and forest fires. In the 1990s this squirrel became controversial when conservation groups objected to the construction of a University of Arizona observatory in its territory, and since the construction the numbers of squirrels have been closely monitored.

The Phoenix Zoo captured four of the squirrels, two males and two females, in 2011 when it feared that wildfires that summer might devastate the remaining population. The two females died, but the males remain in captivity at the zoo. Zoo researchers have been learning everything that they can about these squirrels in the hopes of starting a captive breeding program to replenish the numbers, which are currently so low that the species could be exterminated by a single ecological disaster such as a forest fire or severe drought.


There are difficulties with any effort to breed Mount Graham red squirrels in captivity. The squirrels are extremely territorial, and will not tolerate the presence of other squirrels in their vicinity except for mating. The females of the species go into heat for only one day a year, so the timing has to be perfect. The zoo researchers are developing a guide for keeping the squirrels in captivity, which is being updated as they learn more. 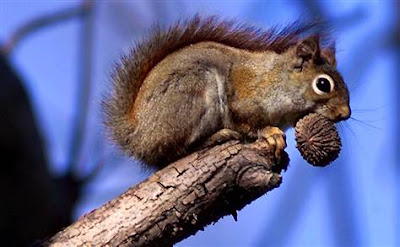 The proposed pilot program calls for capturing a maximum of sixteen Mount Graham red squirrels over a period of ten years for captive breeding. After that ten years, a decision would be made based on results, on whether to launch a full breeding program. The Fish and Wildlife Service may approve the pilot program as early as this spring, although further delays are also possible.

The real question, of course, is whether the species can survive long enough to see the implementation of the program.

More On The Squirrel Bridges of Longview, WA

I have not yet found a photo of the new squirrel bridge in Longview that I wrote about in my last post. However, I did just run across this photo from the Washington Post of the town's second squirrel bridge, which was installed in November 2011, and I wanted to share it. As you can see, it is a very nice covered copper span: 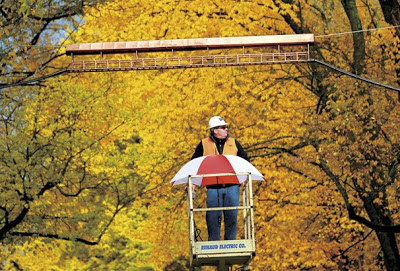 I want to share some happy news today. One of my favorite towns, Longview Washington, will soon see its third squirrel bridge. The twelve foot long, 72 pound bridge will be installed today by the Sandbaggers, a local civic organization, on Nichols Boulevard.

The bridge was designed by John Dick, and is based on the Leonard Zakim Memorial Bridge in Boston, MA. After being declared the winner of the Sandbaggers' annual bridge design contest, it was built by employees of a Longview construction company, JH Kelley. Unfortunately, Mr. Dick did not live to see his design become reality.

The town of Longview plans to construct a squirrel bridge every year in conjunction with its annual SquirrelFest celebration, which I have written about before on this blog. I will be looking for photos of the new bridge in place after installation, and hope to share them here soon.

Many thanks to the Sandbaggers and the people of Longview for caring so much for their squirrels. It would truly be wonderful if all communities had such compassion for squirrels and all other living creatures.