Since the last couple of posts on this blog have been kind of grim, I thought a bit of squirrel cuteness overload would be appropriate. So in this spirit I present... the Siberian flying squirrel! 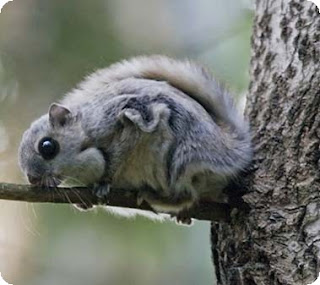 The Siberian flying squirrel is found in forests of older pine, cedar and spruce trees from the Baltic Sea in the east to the Pacific coast in the west. They usually nest in abandoned woodpecker holes, but will sometimes use birdhouses. The nest is lined usually with lichen. This squirrel's diet consists of leaves, seeds, pinecones, nuts, buds, and berries. Like the eastern gray squirrel, the Siberian flying squirrel will also occasionally eat birds' eggs or even nestlings, if other food is scarce.

The length of the Siberian flying squirrel, including the tail, ranges from around five inches to almost nine inches. The female is usually a bit larger than the male. It is gray all over, with the belly a slightly lighter shade than the back. The shade of gray becomes slighter lighter in winter. The most noticeable feature is the huge black eyes. The large size of the eyes is necessary for this nocturnal squirrel to see at night.

Like other flying squirrels, the Siberian flying squirrel glides from one tree trunk to another using a membrane, the patagium, that stretches like wings between each of the fore and hind legs. Their gliding ability helps it to escape from predators and to move from tree to tree in search of food without having to leave the trees. It is believed that many Siberian flying squirrels will spend their entire lives in the trees without ever touching the ground.