The Cape ground squirrel lives in arid regions of southern Africa, including the Kalahari desert. It is cinnamon-colored on top and gray below, with a white stripe running down each side of its body, and has a large, bushy tail. It eats mostly roots and bulbs dug from underground, and grasses, shrubs, and herbs. The Cape ground squirrel hardly ever drinks, getting most of its water from the plants that it feeds on. 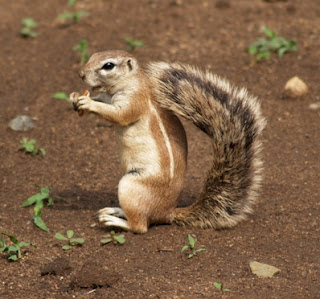 The Cape ground squirrels live in separate male and female groups, which come together only during the mating season. The female groups consist of around three adult females and their juvenile offspring. The male groups are made up of up to nineteen adult males. Groups live in clusters of burrows with numerous entrances.

Cape ground squirrels use their bushy tails like umbrellas to shade them from the extreme desert heat. They also use the tails to confuse and frustrate predators such as snakes, as seen in this video about a group of ground squirrels fending off a Cape cobra. Don't worry, the squirrels are more than capable of dealing with the snake:


Just check out how bushy those squirrels' tails get when they are mobbing the cobra. I would like to hear Randall from the Honey Badger video narrate a video of these badass little squirrels!
Posted by Dan H at 4:13 PM